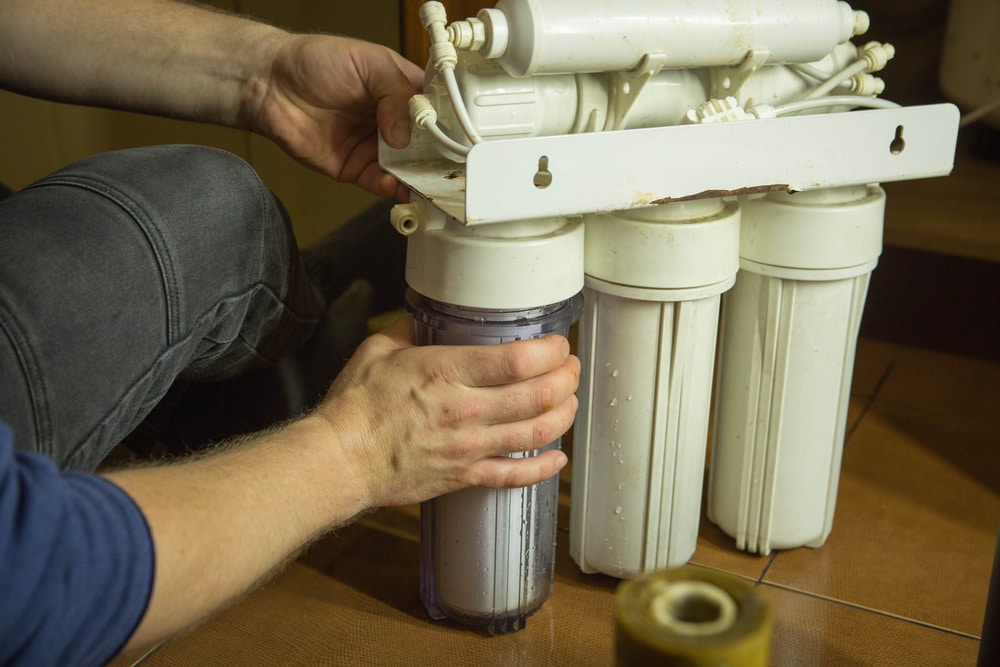 Did you know? Even supposedly “clean” tap water can have traces of bacteria, pesticides and a range of other contaminants in your water. The good news ss that water can be distilled and get completely rid of all the nastiness in your water.

The answer is yes, you sure can distill your water at home and we’ll describe exactly how to do so.

This article is part of the Water Quality Information Guide main page.

How can I quickly distill water?

It turns out that there are several different ways that you can distill water at home. We’re going to give you step by step instructions for a number of different methods. Here goes…

Invest in a Water Distillation System 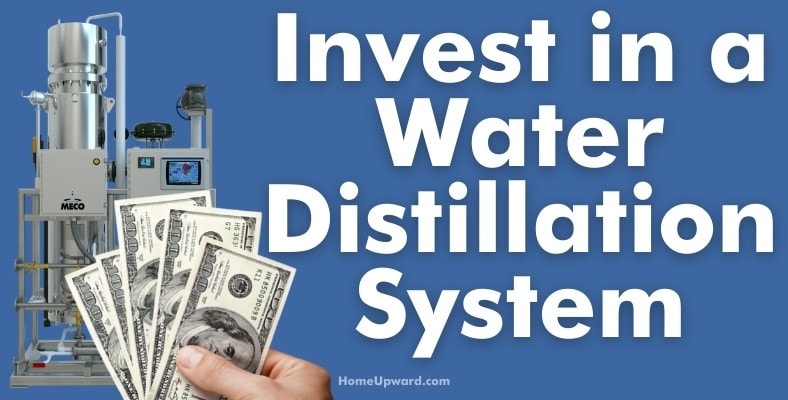 If you have decided that you want to enjoy distilled water on a regular or frequent basis, then it may be worth considering investing in a dedicated water distillation system.

You can buy such systems from the likes of Walmart and Amazon. But if you decide to follow this route, then be sure to do your homework and check out prices.

This is because they can really vary in price, with some going for as little as $50, and others costing about $600. Although most will cost between $80 and $250.

How to Make Distilled Water Using a Bowl 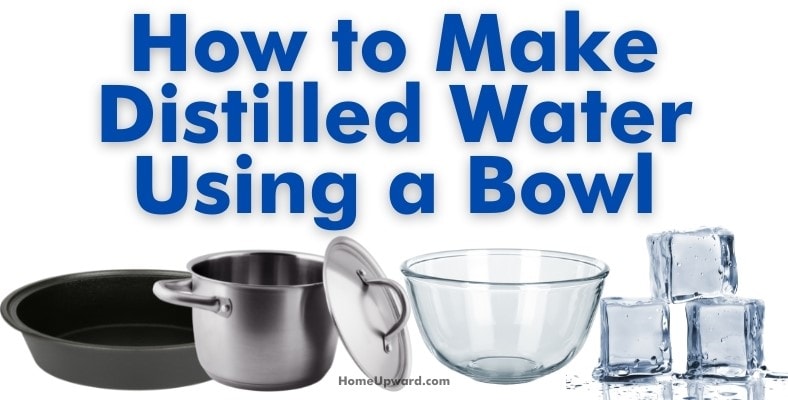 Step One: Preparing the Pot

Fill the large pot with tap water up to the half-way point.

Place the glass bowl inside it and look to see if it floats.

The glass bowl is not meant to touch the bottom of the pot, so if it does add more water until it floats.

Place the pot onto your stove and set it to a medium to high heat to boil.

Boiling the water removes such chemicals as ethanol and methanol.

Once the water is boiling you can move onto Step Three.

Now it’s time to turn the heat down to low.

Take the lid and place it upside down on the top of the pot.

Fill the flipped with ice cubes. This serves to create a hot and cold barrier.

As the hot water vapor rises and reaches the cold lid, you start to get condensation.

Now you can turn the heat back up to high and allow the water to give off more steam.

This will create more steam, and you will get more condensation.

The water droplets formed on the underside of the flipped lid will start to drip into the glass bowl.

Keep an eye on the situation to ensure that the water in the glass bowl does not start to boil. If it does start to bubble, turn the heat down right away.

Allow your homemade distillation device to do its thing until you have enough distilled water.

Once you have all the distilled water you want, turn the heat off and remove the pot from the stove.

Carefully remove the lid, ensuring that the hot steam released does not scald you.

Carefully remove the glass bowl from the pot. (If you prefer you can allow it to cool down a little first.)

Allow your distilled water to cool completely before transferring it to a glass container for storage. 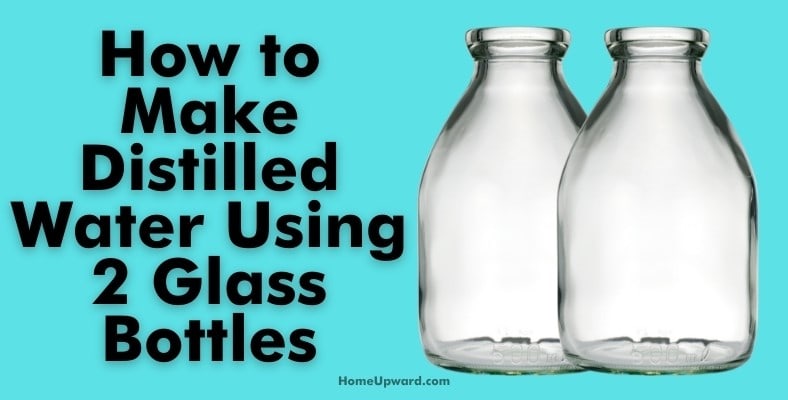 Step One: Preparing the Bottles

Fill one bottle with tap water, leaving 5 inches between the water and the top.

Wrap the bottles up together tightly with duct tape.

Fill a large 5 gallon pot and fill it with just about enough to cover the bottle with the tap water.

Place the pot on the stove and set it to a high heat.

Tilt the bottle 30 degrees, as this will help evaporated droplets to make it to the empty bottle.

Step Four: Continue until you have your desired amount

You can now sit back and let your homemade distillation device do the rest of the work.

Once you are happy that you’ve got enough distilled water, you can turn off the heat and remove the bottles from the pot. (Be careful doing this. You can let them cool a little first.) 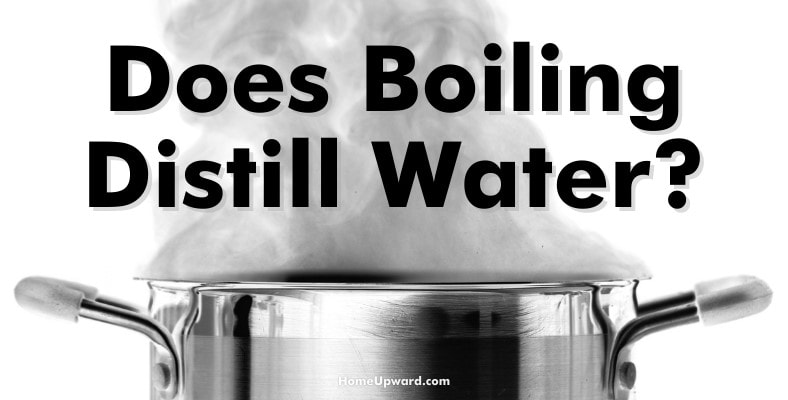 Boiling water is a super popular way of ridding your tap water of impurities or hidden nasties. And it was no surprise to me to learn that distillation involves boiling the water to produce a vapor and that this vapor that is released is free of all impurities and contaminants that left behind.

However, it’s important to note that boiling water alone is not enough to fully distill it, and boiling water into a vapor can only potentially remove a few impurities, and will not give you pure distilled water. 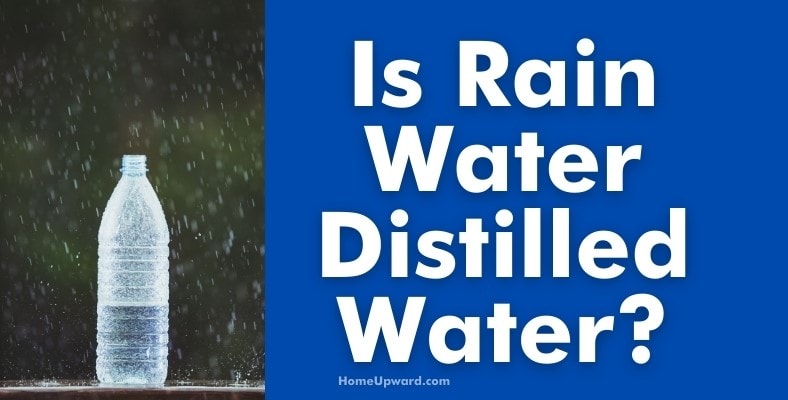 Before I looked into this, I thought the answer was going to be a resounding NO. But I was pleasantly surprised…

Rain water it turns out, is in fact nature’s own distilled water. Rain water is formed when water evaporates from the ocean and condenses into clouds, and it is pure, distilled water void of any mineral deposits and bacteria and other contaminants…(please read on)

But, and it’s a big but, once this rain water begins to fall from the sky, it meets with other substances in the surrounding air. It then proceeds to absorb all manner of pollutants and contaminants, and is no longer classed as pure distilled water.

And by the time it reaches and soaks into the ground, it has become mineral water.

How do you make demineralized water at home? 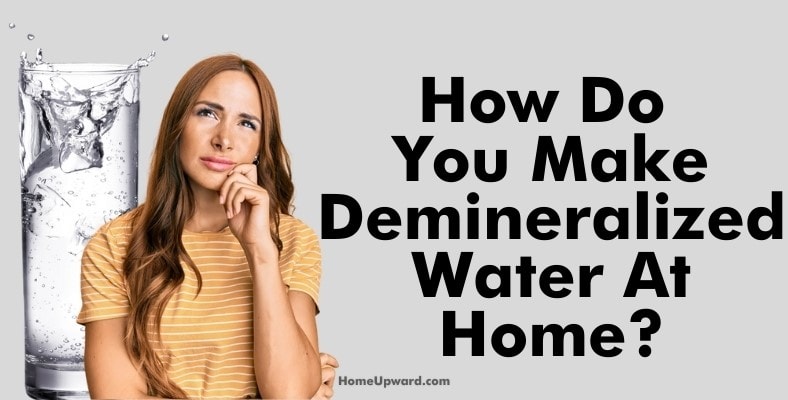 Now, let’s be clear from the beginning here. Demineralized water is not the same thing as distilled water…

Demineralized water, also known as deionized water, is water that has been purified in such a way that most of its mineral and salt ions are removed.

Whereas in contrast, demineralized water retains some organic contaminants, such as viruses and bacteria, because the deionization process does not remove uncharged molecules, only charged molecules.

Now, I’ve been doing my research into this and I have found that there are 3 ways to make demineralized water. These processes are as follows:

And unfortunately, it turns out that none of these methods can be carried out easily at home. You would need a treatment plant, special machines, or at least a laboratory.

Where can you get distilled water from?

You can often buy bottled distilled water in superstores, like Walmart, and from pharmacies.

But if you can’t find any in your local store or pharmacy, there are plenty of online stores that do stock it…

You can buy distilled water from online retail giants such as Amazon and eBay. Though if you do decide to buy through eBay, we strongly recommend that you buy through a good, reputable seller.

Or if you wanted to cut out the middleman, you can buy distilled water directly from those organizations that distill it. Take Zen WTR for example, not only do they offer vapor distilled water, with an alkaline pH, but it comes in a 100% recycled bottle.

Every ZenWTR bottle of water helps to prevent up to 5 plastic bottles from reaching and polluting the ocean.

◀ PREVIOUS: How to test for lead in water at home
NEXT: Why is brown water coming out of the tap? ▶