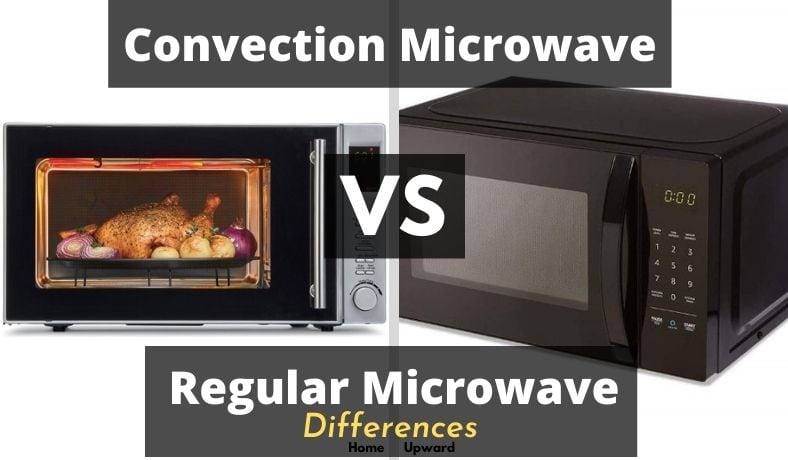 The two most common types of ovens are the standard microwave and the convection oven. They may look alike, but both serve very different purposes.

Of course, the one that deserves a spot in your kitchen will depend entirely on your needs. Here’s a quick guide on a convection microwave vs standard microwave to help you decide between the two. 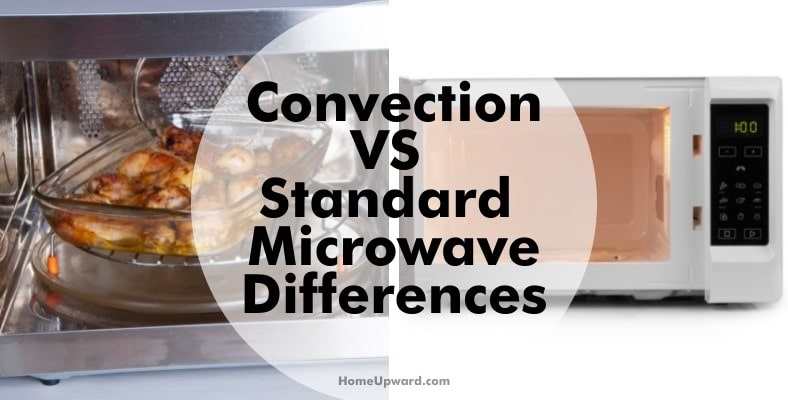 The major difference between a microwave and convection oven is the purpose each is used for. However, those aren’t the only things that differ! Other divergent characteristics are as follows:

While both ovens have a rectangular body, the inside is completely different. A standard microwave oven contains a magnetron, a built-in electromagnetic wavelength generator that produces microwaves.

The microwaves start from the magnetron and travel through the waveguide before finally reaching the stirrer, which evenly distributes the microwaves into the oven cavity.

As well, microwave ovens come with a rotating turntable to ensure food heats from all sides. In contrast, the convection oven contains heating rods on the oven ceiling and bottom, grill, and a fan.

The Power Source and Consumption

Convection oven models come with either gas or electric power, which makes them a feasible option for every household. However, electric models are considered more safe and reliable.

On the flip side, microwave ovens can only operate electronically, and due to that mechanism, they have no other way of being powered by an alternate source. Still, they have the benefit of being more energy-efficient compared to their counterparts.

When it comes to energy consumption, the microwave oven is the budget-friendly version since a convection oven can really hike a home’s energy bills.

That’s reflected by the energy consumption range of a convection oven being between 2,500 to 5,000 watts; whereas, depending on the model, a microwave may consume energy anywhere between 500 to 1800 watts.

How long food takes to cook depends on the quantity, thickness, and more. If you set the same cooking time in a microwave and a convection oven, the outcome will be very different.

The common belief that microwaves cook food faster is untrue. They can heat or defrost food faster than other ovens, but when it comes to cooking, a microwave can take hours and still leave the food half-cooked.

A convection oven is capable of quickly attaining high temperatures and is more efficient at evenly distributing heat around the food for even cooking.

Your cooking requirements can help you decide which type of oven is right for your home. Here’s how both differentiate in functioning:

A microwave and convection oven both need a cleanup, sometimes right after use. However, one offers more convenience than the other.

A microwave has a smooth interior, so all you need is a clean, damp towel or piece of cloth to give it a good wipe. If there are spills or stains on the turntable, remove the glass plate and hand wash it with soapy water. Cleaning may not even be necessary if you use a microwave lid to cover the food. 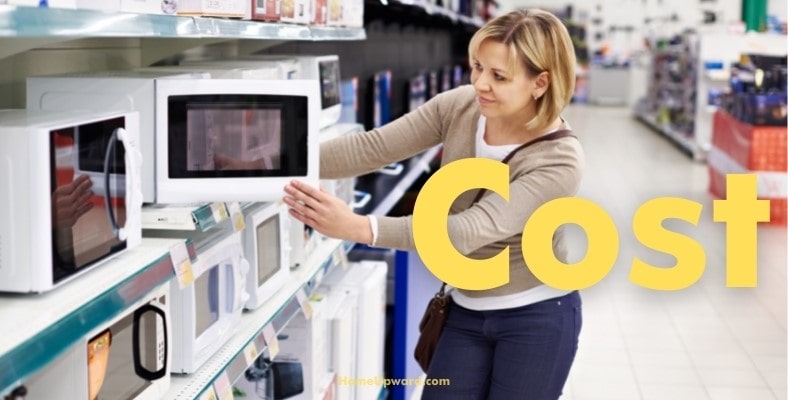 How Does a Convection Microwave Work? 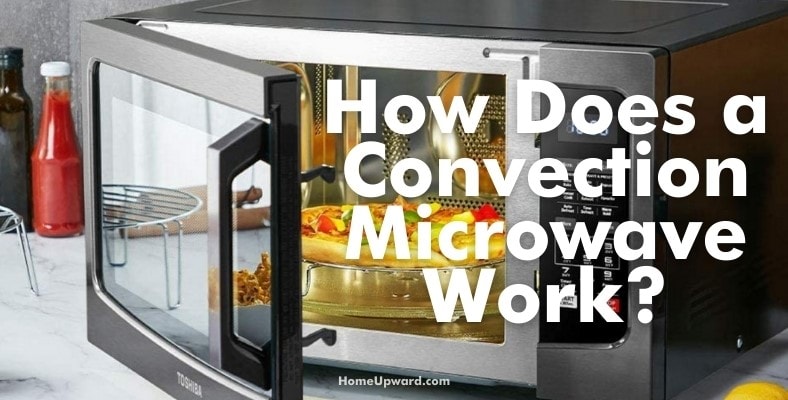 A convection microwave has dual modes. The first mode is the standard microwave mode which cooks or warms food using microwaves, which penetrate food and cause vibration in the water molecules present in the food. This has the end result of producing heat that cooks or warms the food.

The waves travel within the oven in a to and fro motion and cancel each other, which is the reason why food doesn’t evenly cook or heat evenly. That’s why microwaves have a turntable to ensure even heat distribution.

The second mode is the convection mode, which converts the microwave into a convection oven. For this function, microwave ovens have heating elements and a fan that circulates hot air around the food and cooks it. This makes the microwave a two-in-one option and a versatile appliance. You can cook, bake, broil and roast, and heat food, all in one machine.

Most models come with preset settings for cooking certain foods and can even automatically alternate between microwave and convection mode.

How to Use a Convection Microwave Oven?

Although a convection oven comes with two modes, you’ll need to switch to use either.

For the regular microwave function, choose the microwave setting and heat, defrost or do short-term cooking. This includes warming liquids, making popcorn, reheating leftovers, and more.

Turn to the convection mode when you want to bake cakes or pizzas, roast meat or vegetables, and cook something with a crisp exterior. You can either go with the preset menu or set your own time and temperature.

What Can You Cook in a Convection Microwave? 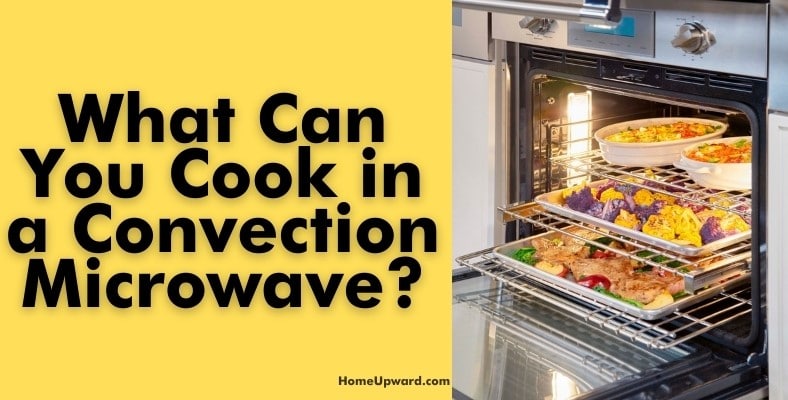 A convection microwave can cook everything that a standard convection oven can. You can bake and crisp pizza, roast an entire chicken, bake casseroles, cakes, cookies, and more.

Which Utensils to Use in Microwave Convection Ovens? 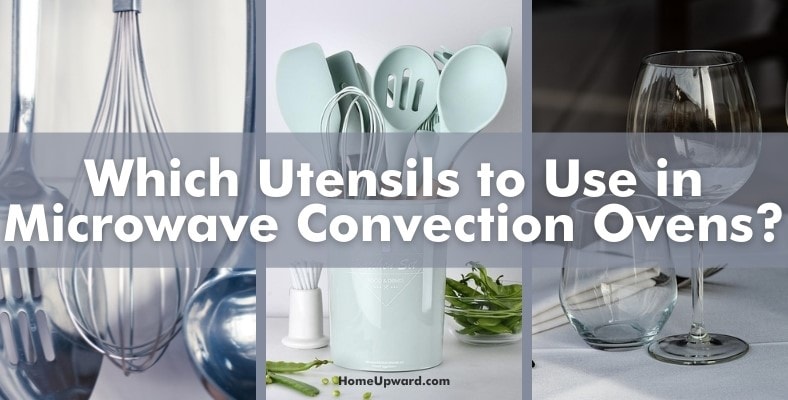 It is safe to use metal, glass, and silicone utensils marketed as microwave-safe but during the convention mode only. Materials made from wood, plastic, or paper should not be used in a microwave convection oven.

Make sure not to use metal during the microwave mode as it will not allow microwaves to penetrate the food and can also cause burning and arcing. It is also safe to use aluminum foil but with restrictions. Don’t cover the entire food with aluminum. Instead, cover portions of food to prevent overcooking.