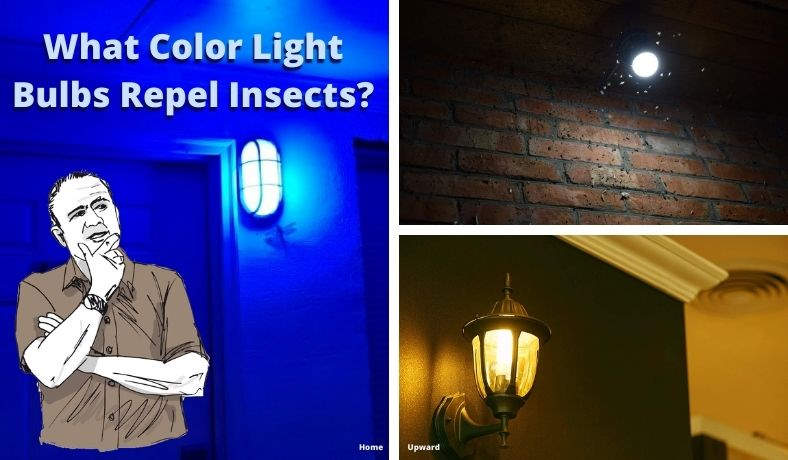 The lovely night air is great and porch bulbs are lovely until you have to step outside and deal with those awful bugs they can attract. Don’t even get me started on having to swat them away from my face!

A great place to start is choosing a light bulb that won’t attract bugs. What color light bulb repels insects? We’ll cover that and more here.

As it turns out, there has been scientific testing done to find out which colored bulbs don’t attract bugs.  These tests, in addition to certain wavelengths (lightwave properties), have revealed a lot about the types of light seen by bugs and how this affects the bulbs you should use.

In general, the majority of bugs are drawn to short wavelengths of light.  This is especially true of ultraviolet (UV) light.

Bugs are attracted to UV light because they can see it better and it helps them to navigate.

Bulbs that emit shorter wavelengths of light (towards the bluish end of the visible light spectrum) will attract more bugs. These are usually bulbs that shine in a cool white or bluish color.

Bulbs that give off longer wavelengths will attract fewer bugs.  Some examples of this are bulbs giving off yellow, orange, or red colors.

In addition to the light given off by a bulb, the type of bulb can affect how many bugs are drawn to it.

LED lights produce very little UV light, so they are less attractive to bugs.  Heat also attracts bugs, so this is another added benefit of LED lights since they stay cool.

Choosing an LED light with a yellow hue is going to be your best bet in not attracting bugs.

In tests, it was found that after the warm-colored LED, the next best lights to use are (in order of preference):

Traditional incandescent bulbs were the worst for attracting bugs. Think about this the next time that you replace the bulb in your porch light – spend the extra time to choose one of the types recommended above. 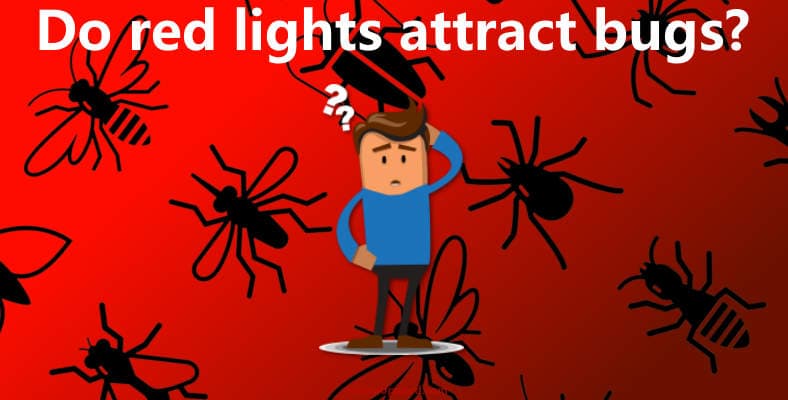 The quick answer is that no, red lights don’t attract bugs.  Red light is within the part of the visible spectrum that includes longer wavelengths. Red light created by bulbs and other fixtures is situated even further along the spectrum than yellows and oranges.

This means that bugs will find it more difficult or even impossible to see the color red. For people who love color lighting like string lights, that’s great news!

Feel free to get creative on your patio and use as many red lights as you desire. Try LED chili lights, Christmas lights, or even simple red light bulbs – all without having to stress out wondering if you’re bringing in unwanted visitors.

What are some other bug-free outdoor lights to look for? 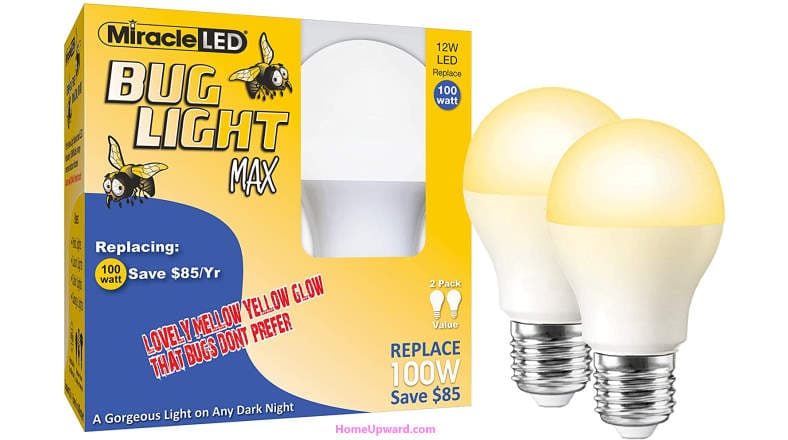 You can find great bulbs that don’t attract insects such as these LED yellow bulbs at many retailers these days. Since they’re LED, they also give off very little heat (helps avoid bugs as well) in addition to being wonderful energy savers!

There are specific lights and bulbs made to repel bugs.  You can pick these up online and at major retailers such as Amazon, Walmart, Home Depot, and others. In general, you’ll notice that these lights use a yellow tone with little to no UV light.

They also don’t give off much heat at all, unlike older incandescent and halogen bulbs. Both of these are the ingredients for the best type of light that will not attract bugs. 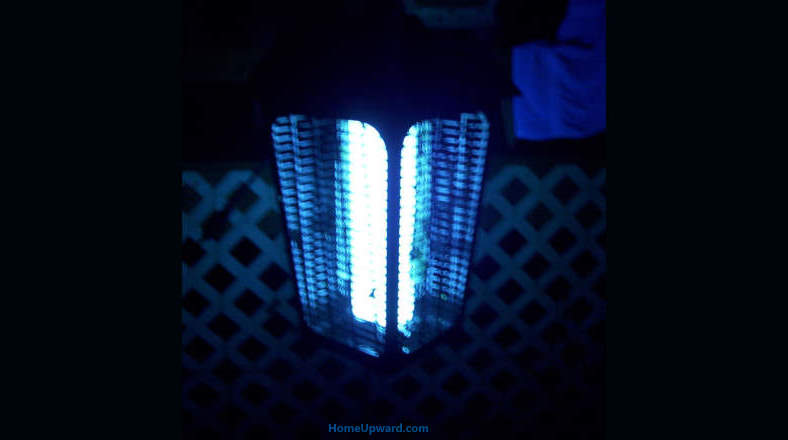 A bug zapper hanging outdoors where it attracts and kills pesky bugs. Table top versions are available, too.

Some people opt for a bug zapper.  These are basically blue lights inside of an electrified hanging metal lamp that attracts bugs on purpose: away from you and onto the electric “grill” where they’re electrocuted and killed.

This type of light fixture is used especially for mosquitos and can be pretty effective.

What are other natural repellents I can use outside? 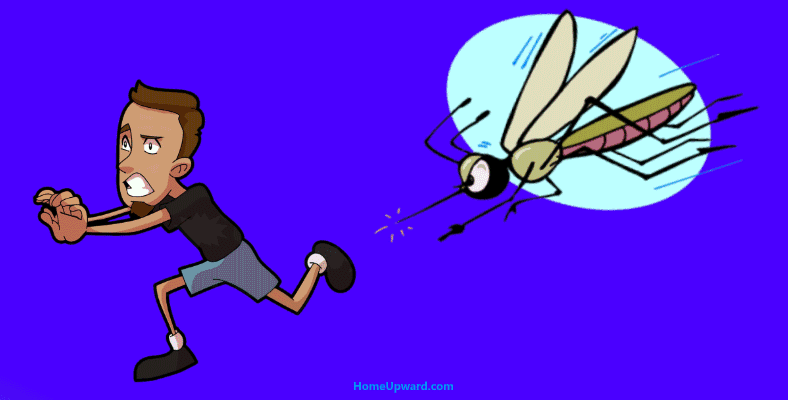 Choosing the right light is the first step to creating a bug-free outdoor experience, but there’s a lot more can do to naturally repel bugs.

An example of a common (and inexpensive) citronella candle is shown here. They’re easy to use, and affordable – plus they work to keep bugs away!

Why are bugs attracted to light, anyway?

There are several theories as to why bugs are attracted to light.  One possibility is that humans might be playing a cruel trick, sort of, on bugs thanks to our invention of artificial light.

The way an insect interacts with light is known as “phototaxis.” Bugs that are of the type positively phototactic move toward light sources (most flying insects such as moths, flies, and mosquitos).

By contrast, negatively phototactic creatures (beetles, cockroaches, and earthworms) move away from the light.

More ideas on bugs being drawn to lights

You obviously don’t have to worry about ugs that are wanting to get away from the light in this instance. It’s a theory that bugs, such as moths and other flying insects, normally use the natural light of the moon and stars to navigate.

Sort-of like they would “keep aligned” with the faraway object if you will. Since artificial light sources change as the insect passes it, it tries to keep itself aligned but it can’t and ends up flying in circles.

Another theory is that when an insect can see a light it knows that the path is clear and so it flies straight toward it.

A third theory is that bugs are attracted to lights that specifically emit UV light because many flowers reflect UV light.  They could be mistaking the light for a flower.  That’s a good explanation for why they prefer UV lights as I mentioned earlier.

Finally, researchers have theorized that male moths could be mistaking light for female moths.

It was discovered that the infrared light spectrum given off by the flames of a candle has a few frequencies in common with the light that’s given off by a female moth’s pheromones.

It’s true that there are holes in all of these theories, however, the most widely accepted is that bugs are trying to use light for navigation.