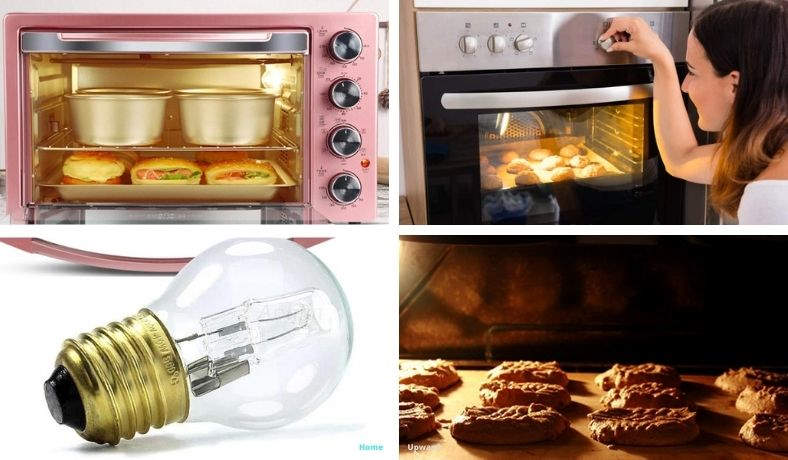 Inside nearly every oven, there’s an ever-so-helpful lightbulb that allows you to check how your cooking is going: if anything is burned or going wrong, and much more.

Oven bulbs can have some differences you should be aware of when it comes time to replace them. But what kind of light bulb is right for an oven?

What kind of lightbulb goes in an oven? 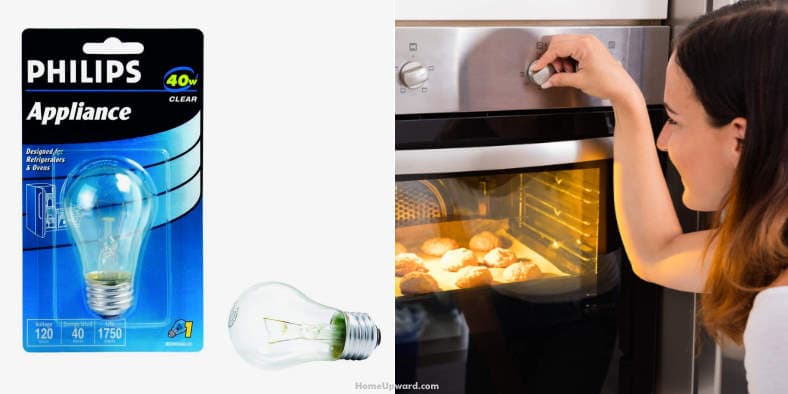 Oven bulbs are anything but ordinary. The ones used inside ovens are generally referred to as appliance bulbs. These bulbs are specially designed to work with appliances and the harsh conditions found inside several appliances they’re used with.

A normal light bulb, though it’s well fitted for things like your bedside lamp or that overhead fan in the living room isn’t suited for an appliance and certainly not suited for the super-hot interior of an oven. Everyday bulbs are very prone to failing due both to vibration and temperature extremes.

What is the difference between an appliance bulb and a regular bulb? 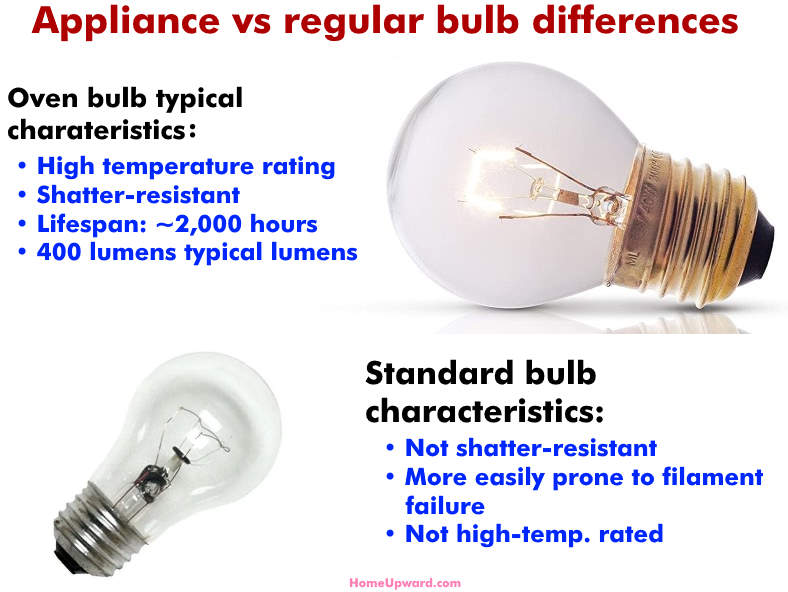 There are a few differences between an appliance bulb and a normal lightbulb. The first and most obvious difference is what the lightbulb is designed to withstand and go through. Your average halogen, incandescent, fluorescent or even LED bulb isn’t going to be subjected to extreme heat like the bulb inside of an oven is.

The bulb in an oven is encased in a sort of special compartment that keeps it safe but that isn’t heat resistant, meaning it’s still going to be exposed to the oven’s extreme heat – typically as high as 500 degrees Fahrenheit.

An appliance bulb is designed – or rated – to withstand extreme temperatures and not shatter.

If you were to put a normal bulb in an oven the extreme heat would make the bulb shatter – dangerous for you, your family and it could even get glass into your food that’s cooking and the oven interior. Appliance bulbs are designed to be shatterproof so that you don’t have to deal with shattered glass inside your oven.

Other appliances use them, too

The same type of bulb that you might use in an oven is the same type you would use in a fridge or freezer. These bulbs are meant to get very cold and get very hot and not shatter or become damaged in any way.

Another striking difference is that these bulbs are always a much lower wattage than bulbs that you would use in other places in your home. The wattage of a normal household bulb is going to be 60 to 90 or 100 watts.

These bulbs need to be bright so that you can see by the light that they project and you can do so without eye strain or damage. Appliance bulbs are going to be much lower wattage at around 25 or 40 watts. These bulbs don’t need to be super bright since you just need them to be able to see the interior of the oven.

How big are oven light bulbs? 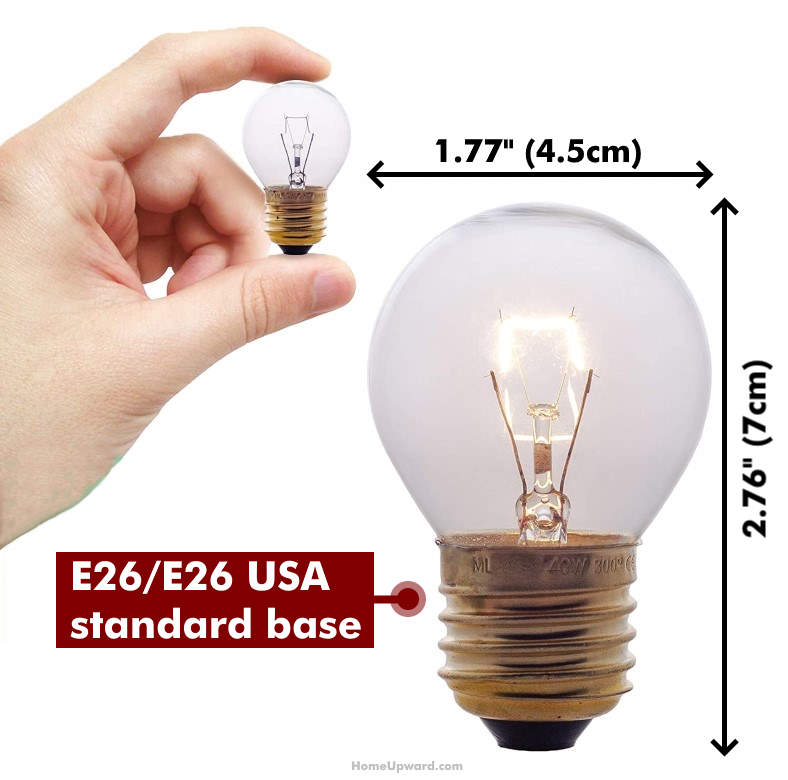 Example measurements for a typical small oven bulb. Not all will be the same size, but it gives you a good idea of about how large many are.

These bulbs are also going to be much smaller than a typical bulb. For example, they’re often close to 2 inches tall and 1.5 to almost 2 inches wide at their widest point (on the glass bulb section).

Though they have the same shape and often have the same size base as other types, they’re smaller than a normal bulb for the specific reason that these bulbs are going to be fitted into much smaller spaces.

A normal light (A19, the common household light bulb) might go in a lamp for instance, and therefore doesn’t need to be very small. On the other hand, ovens have very small space that one must fit into in order avoid getting hit with a cooking rack or to interfere with the oven functions & cleaning, too.

In short, you can’t put just any bulb into your oven. You need to take the time to make sure that the bulb being used is rated for your oven, that it is the right size, the right shape, and the right wattage to fit your specific oven.

How to replace an oven light bulb 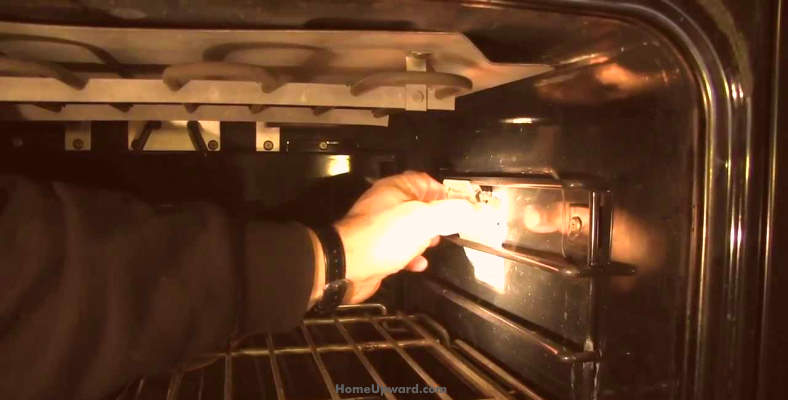 Example of replacing an oven light bulb. In most cases, this requires unscrewing the original one then inserting & replacing it in the reverse way.

Replacing a bulb is simple enough. The oven bulb is usually found on the top area of the oven, normally on a side (near the back) or the rear. Some may also be found in the top of the oven interior, too.

Though these lights are shatterproof they’re sometimes covered with a clear cover.

You’ll need to make sure the oven is completely cool then remove the racks so that you have room to get to the bulb easily and without a lot a ton of hassle. You then need to remove the cover and the bulb.

Be sure the bulb, if working, has had time to cool off completely as well.

Removing the bulb is usually done by (depending on the bulb type and the oven design):

After removal of the bulb, you may want to do a quick inspection to make sure the socket doesn’t to be cleaned. You can then screw in the new bulb and securely replace the bulb cover.

Note: Some smaller oven, toaster ovens, or other models may require removing the top cover in order to get access the bulb. These type unfortunately don’t allow removing the bulb easily from inside it.

Is there an LED appliance bulb? Can LED bulbs be used in ovens? 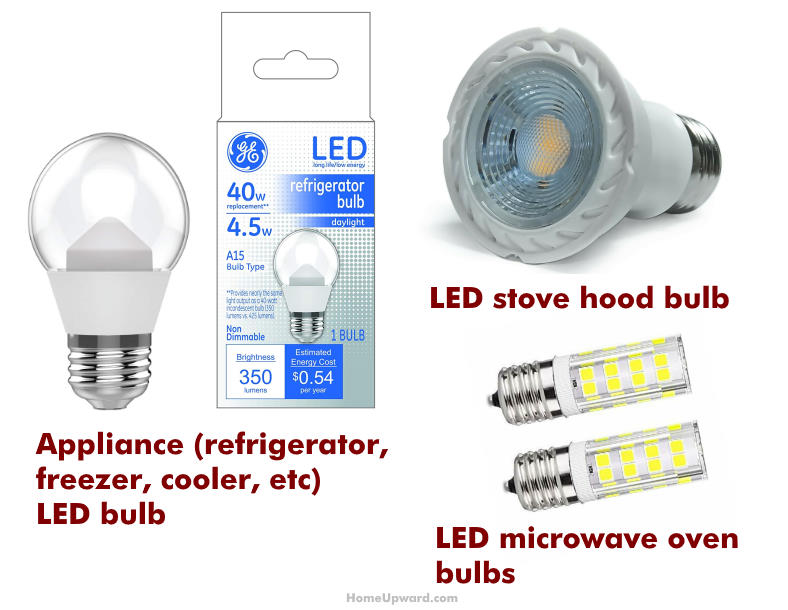 The truth is that there’s some good news and some bad news:

Currently, there are LED bulbs are made to work with appliances like refrigerators, microwave ovens, and the air ventilation hood ranges installed over grills and stoves. However, LED bulbs aren’t able to withstand the high temperature of an oven.

They can even work for a while, but if they don’t fail immediately, they’ll have a very short life. The high heat of an oven is harmful to the LED semiconductor components, the electronics and/or printed circuit boards (PCBs) used to build them, and especially plastics used as a body assembly.

Even worse, LED bulbs with plastic can melt, potentially causing a fire hazard due to heating elements nearby! Plastic can catch on fire and burn for some time, so never use them in high-heat appliances and especially an oven.

Where to buy oven lightbulbs 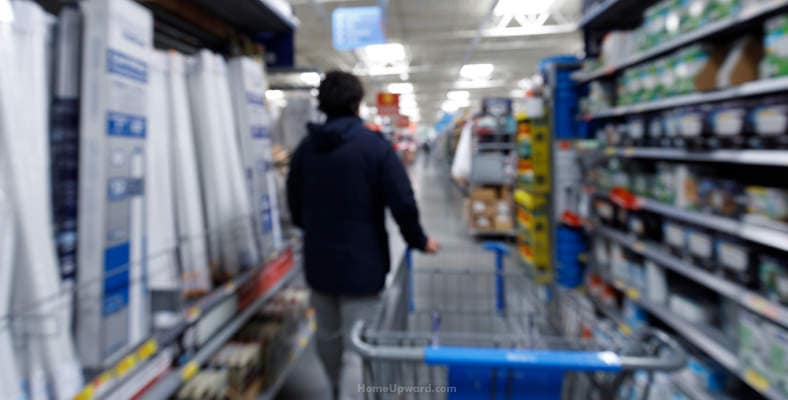 There are plenty of places that you can purchase oven lightbulbs that are going to be safe and work well in your oven. Appliance bulbs are sold at most major retailers, grocery stores, and hardware stores.

You can also purchase appliance bulbs directly from the manufacturer of your specific oven as a replacement part. However, as you might expect, you’ll pay more for them (although at least you can rest easy knowing they’re well-made and also are the right brightness and wattage).

Often bulbs bought from the manufacturer are going to cost a bit more than bulbs that you might buy from a hardware store or even a chain store. These bulbs are fairly common and Philips does make appliance bulbs for purchase.

However, in my experience, as long as it’s a good quality bulb of the correct type and size, you’ll be fine. There’s almost never a reason to spend more.

Many big-name light bulb brands make a version of the appliance bulb that is going to work for your oven. When choosing the right one you should take the time to refer to your oven owner manual to see if there are any specifics that need to be considered when it comes to replacing your bulb.