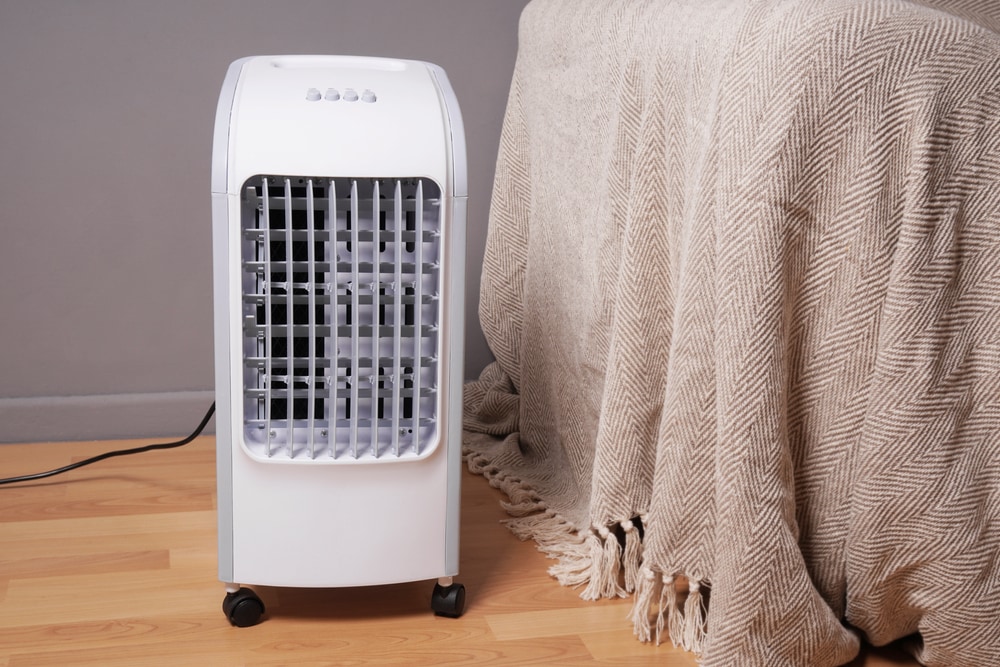 It’s easy to get hot and bothered when the sun is relentless. The good news is that an air conditioner or air cooler gives you the perfect solution for cooling down.

But with portable air conditioners costing much more than the air cooler counterpart, it can be tempting to opt for the cheaper of the two. But does an air cooler work like AC? 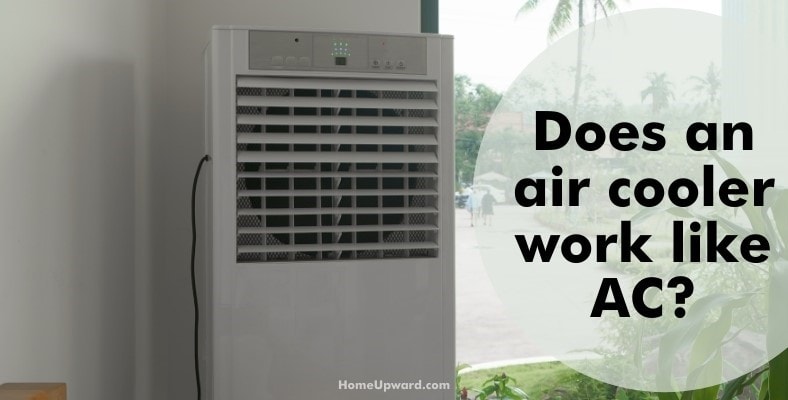 While at first glance it might seem that air conditioners and air coolers are the same thing, there are some key differences. An air cooler doesn’t work like an AC because it doesn’t have a built-in cooling unit. Instead, air coolers use direct evaporation to cool the air down by a few degrees.

They use the method of water evaporation to help cool the room down to a more comfortable temperature.

It’s important to note that air coolers work more efficiently in smaller, dry rooms. This is because they push out cold, humid air. Air conditioners work to dehumidify the air, so in complete contrast to air coolers, these are able to push out cool, dry air.

Is air cooler better than AC? 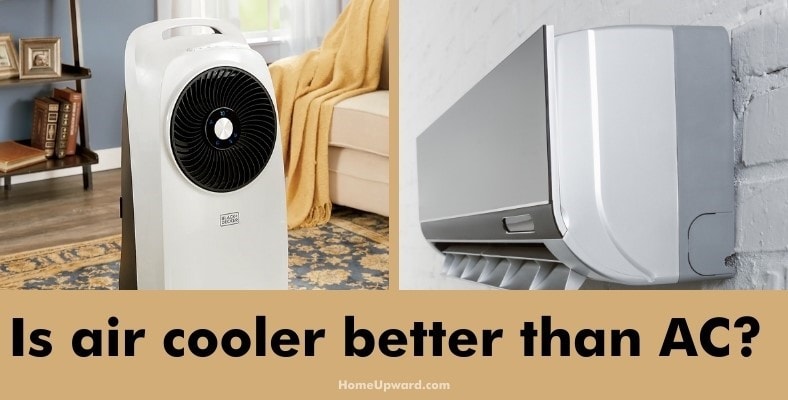 In terms of cooling efficiency, air conditioners are much more effective than air coolers. This is because they can actively cool the air down in your home by several degrees, and often allow you to set the desired temperature.

Air coolers don’t allow you to do this. Instead, air coolers work to push out cold, humid air to cool the air down by a few degrees. You won’t be able to tell an air conditioner the exact temperature that you require.

In terms of cost effectiveness, air coolers are the better choice. This is because they don’t need as much energy as air conditioners, so they don’t cost as much to run.

Air coolers are also better suited for smaller, drier rooms. This is because their efficiency can’t be increased as easily as the air conditioner.

If you’re looking for a cooling unit that will be able to effectively cool down any room in your home or office, then it will likely be worth investing that little bit more in an air conditioner.

You will be able to have more control over the general temperature, and notice more of a cooling influence. However, if running costs are a concern, the air cooler will be the ideal choice.

What are the disadvantages of an air cooler? 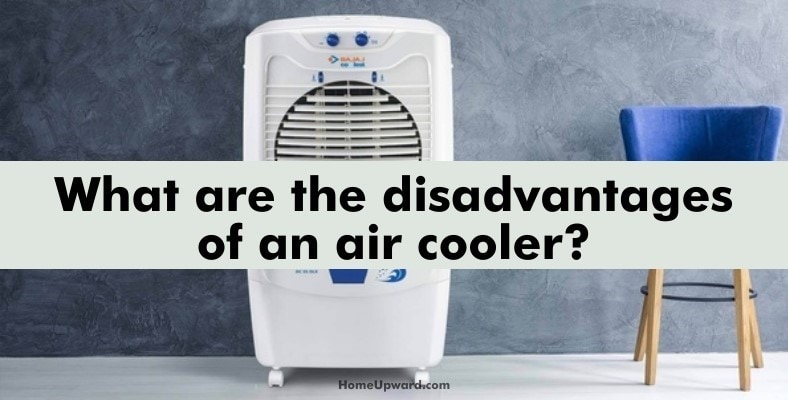 There are a few to bear in mind when trying to decide between an air conditioner and an air cooler.

Air coolers are very different from air conditioners. They simply blow cold, humid air into the room in an attempt to cool it down. This means they’re not the best for rooms that already struggle with damp, as they could make the problem worse.

There’s no point in buying a cheaper air cooler if it’s going to cause you more expensive mold problems over time.

Another thing to bear in mind is that air coolers aren’t as effective as air conditioners. They work to cool the room down, yes – but only by a few degrees. Depending on the temperature in your home, this means the effects of your air cooler might not even be that noticeable.

So no matter what air cooler you buy, it will never be able to cool your room down as effectively as an air conditioner can. Air coolers are also quite noisy, depending on the model that you’ve opted for.

Which is better: air cooler or electric fan? 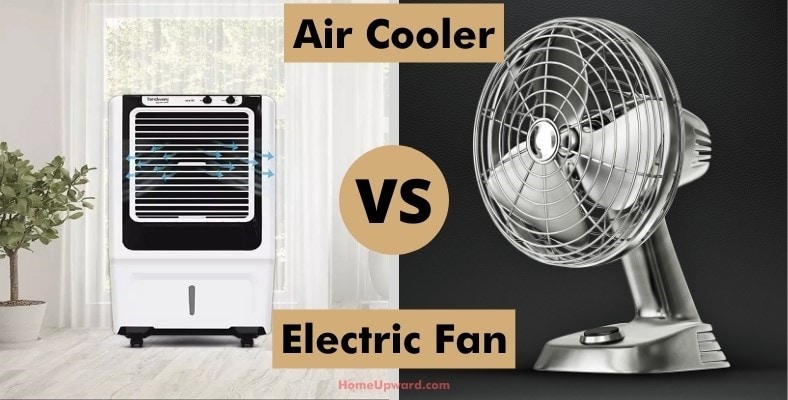 Air conditioners and air coolers aren’t the only cooling technology available. There is also a range of electric fans which are another popular choice for cooling down a room. But which is better? An air cooler or an electric fan?

Electric fans can also only cover a limited area of the room, whereas air coolers work to cool down the whole room.

Tower fans will have more range than electric fans, however, these still aren’t as efficient as air coolers. They do have more of an advantage when it comes to noise, as tower fans can be virtually silent. They also have more powerful airflow than a standard electric fan.

If you’re choosing between an air cooler and a standard electric fan, then we’d suggest opting for the air cooler. This will offer you much more efficient and effective cooling. If noise is a concern, then you’ll be better off going for a tower fan.

Which is the best air cooler for home use? 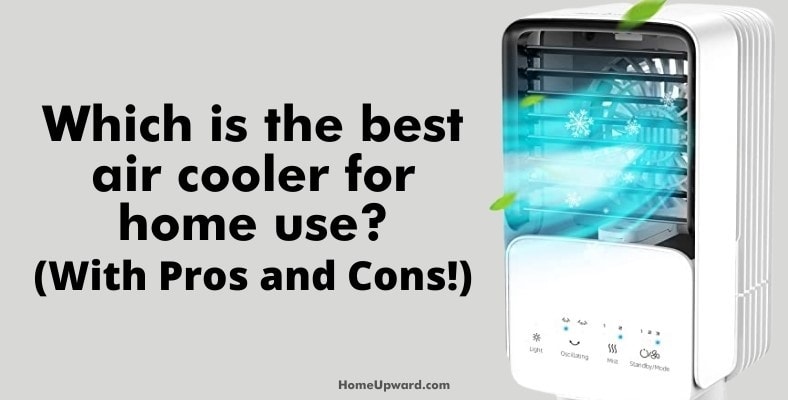 One of the best best air coolers for home use is the AUZKIN evaporative air cooler. This particular air cooler comes with a portability factor, so you can easily move it from room to room.

This will be great if you want to use the air cooler when you’re trying to watch TV, trying to sleep, or trying to work in your home office. This air cooler also works to be quieter than competitive models.

This particular air cooler comes with 3 speeds and 2 different mist levels. This allows you to choose the best cooling settings for your environment. You can easily change the speeds between low, medium, and high for more efficient cooling.

By adding water to the air cooler, you can use the mist feature for effective cooling throughout the whole room.

Another great feature of this air cooler is that it’s capable of oscillating. It offers 2 different oscillating angles to suit your cooling needs. Choose between 60 degree and 120 degree oscillation for a superb cooling design.

The AUZKIN air cooler comes with a large 800ml water tank. This has been specially designed to reduce the number of times you need to add additional water to the tank. You can even add essential oils to the cotton pad in the middle of the air cooler to give you a more refreshing environment.

Why an air cooler is not good for health 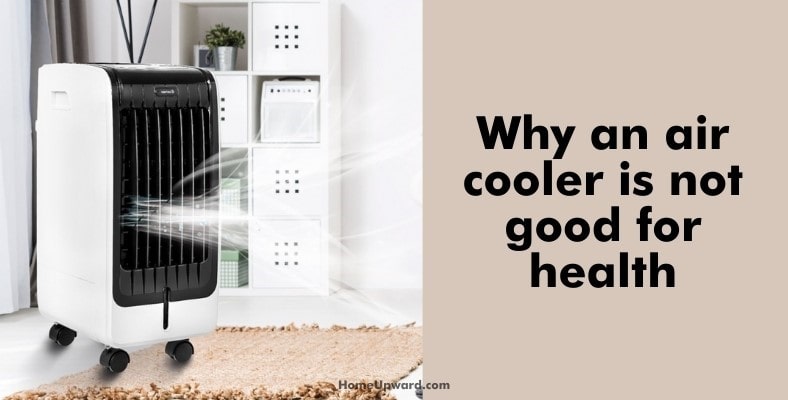 This is because air coolers push more humidity into the air, which can cause a stuffy environment. It could even trigger an asthma attack, depending on the severity of your asthma.

Another factor to consider is that this added humidity can worsen damp environments. It can even encourage mold or damp to grow, which can be very detrimental to asthmatics.

So there you have it! You now know the difference between an air cooler and an air conditioner, as well as the advantages and disadvantages of both. You should also know that an air cooler is more effective than an electric fan.

Now you know all there is to know about these cooling devices, you should be able to find the best one for your needs!