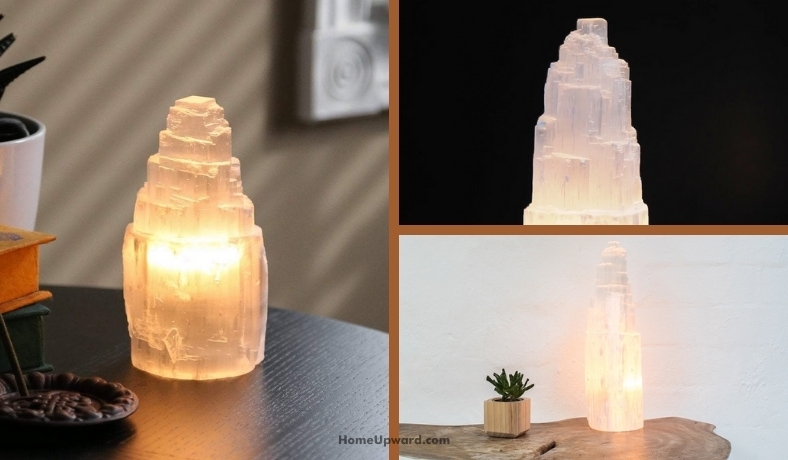 How do you clean a selenite lamp?

Although selenite lamps self-cleanse when vibrating at high frequencies, manual spiritual cleansing is vital to eliminate the negative energy they soak up over time.

So, how do you do an energy/spiritual cleaning on your selenite lamp? The procedure is pretty simple, actually. You’ll need:

Begin by passing the crystal through the smoke of a burning smudge stick, which should repel and ward off the negative energy.

Next, place the lamp in a bowl of salt. You will need a big bowl to fit the entire stone. Leave it for about 4 – 6 hours, then cleanse it acoustically using either a bell or a singing bowl.

After the acoustics, place the crystal in sunlight for about half an hour, then finish the process by keeping it in the moonlight overnight.

However, for physically cleaning your selenite lamp, only blow dry or use a dry cloth. Don’t submerge the lamp in water for an extended period of time.

A damp cloth lightly used to wipe is ok, however.

What happens when you put a piece of selenite in water? 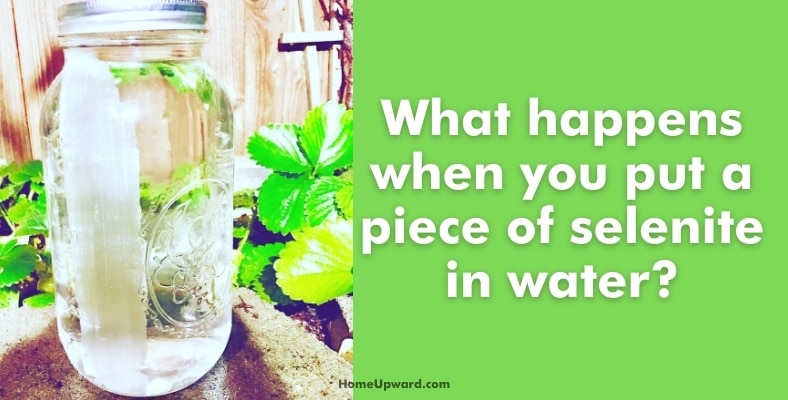 Selenite crystals are porous rocks with natural fissures and fibers that can wear off when mishandled. Additionally, it’s primarily gypsum meaning it will dissolve when placed in water.

You might not notice the difference when you run water over it. But over time, the rock will dissolve and reduce in size.

However, if you soak it for a few hours it will become considerably small, cleave into many pieces, and may even suffer a worn-out finish.

What are the benefits of selenite tower lamps? 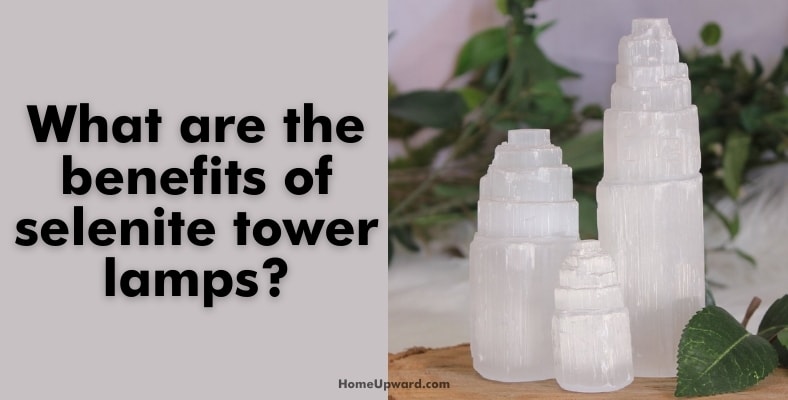 Selenite tower lamps vibrate at high frequencies to radiate positive vibes into your space. They amplify the energy and create a protective shield that disperses all the negative energy. You can magnify this effect by placing other selenite crystals close to the lamp.

To understand the benefits of these lamps, you must know how they work. The tower consists of a light bulb placed inside the selenite rock.

When the light is on, it energizes the crystal enough to produce negative ions, which cancel out positive ions from your space.

Most electronics, like cell phones, routers, microwaves, and computers, produce EMF currents, which generate positive ions. An excess of positive ions creates an energy imbalance, but selenite tower lamps cancel these out to clear your space and mind.

What are the properties of selenite for healing?

Though there is no scientific evidence to back these claims, most people believe selenite lamps have the following healing properties:

Balancing the energy creates positive vibes that can enhance your mental clarity. Your mind will open up to have a better understanding of things instinctively.

A cleared space and mind helps free, open, and activate the crown chakra for spiritual connection.

The crown chakra connects with all other chakras in the body (plus the brain and nervous system), and when open, it brings about a great sense of peace, happiness, and enlightenment.

When the crown chakra is open and activated, it keeps all the other six chakras open, leading to a complete cleansing of blocked/ heavy energy.

A blocked root chakra causes feelings of insecurity about general well-being and finances, while sacral chakra deals with self-worth, especially around sexuality, pleasure, and creativity.

The solar plexus chakra connects to our self-esteem, and right above it is the heart chakra. It is the bridge between the upper and lower chakras and deals with our ability to love others plus have a connection with them.

The last two are the throat and third eye chakras. They represent our ability to listen & speak with confidence and have better intuition, respectively.

When all these are open, you will let go of a lot of negative and heavy energy, resulting in an incredible sense of peace and self-awareness.

Selenite recharges you, your space, and your companion/ friends with positive energy, which helps to build a deeper connection and great sense of camaraderie between you.

Where should selenite be placed in the home? 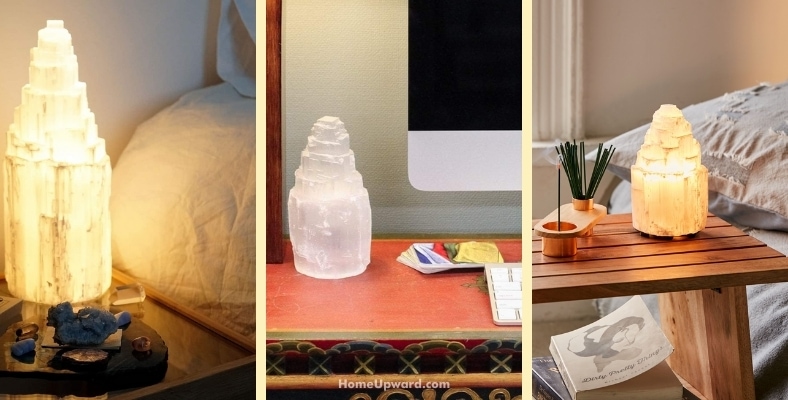 Ideally, you should have multiple selenite tower lamps or crystals to distribute around your home.

In the living room, place them on all corners, display shelves, tables, and window stills because this is the space you and your loved ones spend most of the time. Additionally, it is the room with the most electronics, so more selenite lamps will help cancel out the positive ions more effectively.

If you have a home office, place at least one lamp on your desk or display shelf to boost mental clarity.

The bedrooms also need selenite because they are spaces for peace and rest. After your daily activities, the rock will help you get quality sleep to reenergize for the next day.

The same case applies to nurseries. If you have a newborn, selenite will create a peaceful environment for easy adjustment to the world. It helps them feel protected and cared for while also creating a deeper connection between the two of you.

What is the difference between Himalayan salt lamps and selenite lamps? 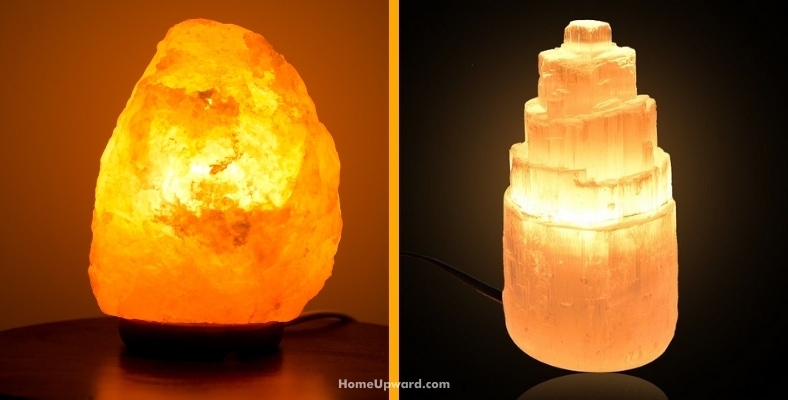 There are two main differences between these two:

Himalayan salt is a hygroscopic mineral salt that is translucent with a pink to orange color. It can easily dissolve in water, so you can only use it indoors and cleanse without using water.

On the other hand, selenite is a porous crystal rock primarily composed of gypsum. It is also translucent and can dissolve in water.

Additionally, the mineral purifies air by attracting pollutants which is beneficial to people with asthma and allergies.

As for selenite lamps, they produce large amounts of negative ions to cancel out EMF positive ions. As a result, they balance the energy more effectively, clear the mind, stabilize emotions, and generally reverse the effects of free radicals.

They may also heal patients with skin disorders, back pains, and other chronic illnesses at an energetic level.