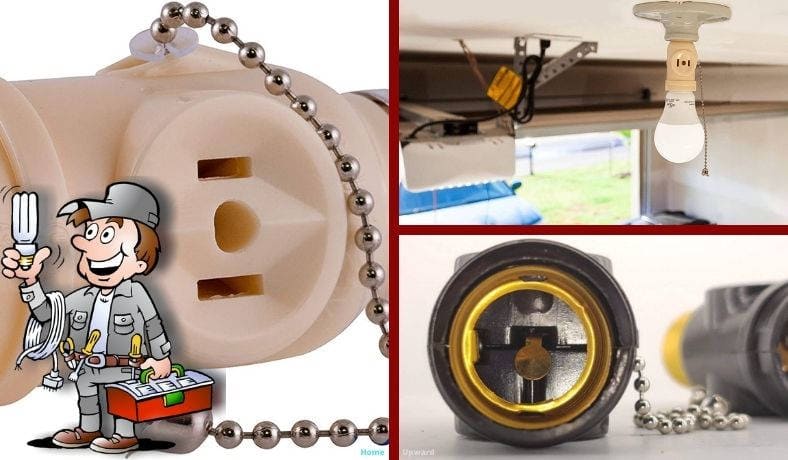 Do you have a light fixture you rarely or never use, but need more outlets? It’s a lot easier to get more outlets via a light bulb socket than you might think!

I want to help you get it done. In this article, you’ll learn the basics of how to convert a light bulb socket to an outlet. I’ll cover the following ways: 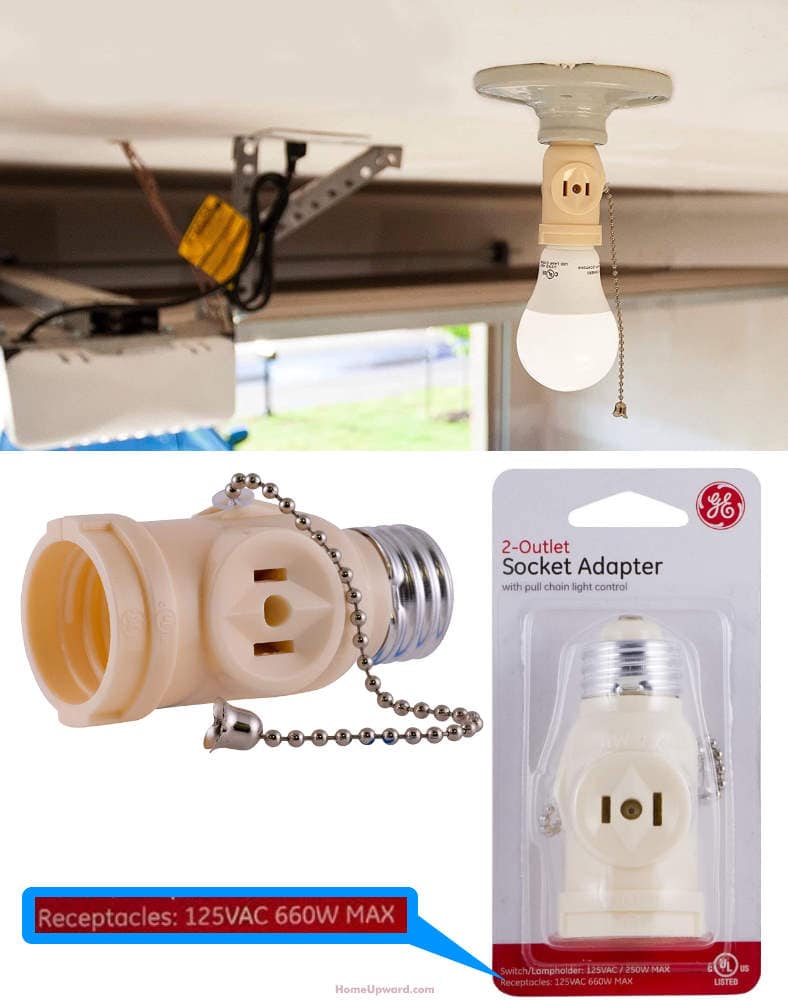 The single easiest way to convert a light bulb socket to an outlet is by using an adapter. However, there are definitely pros and cons versus replacing the bulb socket with a real outlet.

For example, as you can see in the image above, a light bulb socket adapter isn’t rated for higher power levels like a standard (hardwired) outlet is. They’re only rated at about ~660W while most home outlets can provide 1,500W to 1,800W of power.

While that’s not a problem for light-duty appliances, electronics, and so on, you won’t be able to use high power devices like:

How to use a light bulb socket adapter

Bulb socket adapters are super easy to use:

Some also include an on/off pull chain, although that’s completely optional since you can still use the same light switch already installed (just leave the adapter’s on/off switch in the on position).

The good news is that not only is an adapter a snap to install, but they’re also very inexpensive, too: most are only a few dollars.

Option #2: Changing out a bulb socket for an electrical outlet

Getting started: Turn off the power

To begin, make sure you turn off the power to the room you will be working in.

Just turning off the light switch will not cut it – you may end up electrocuting yourself. Be safe, and turn the power off to the room from your home’s circuit breaker box.

Not sure where your breaker box is? Most boxes (also known as circuit panels) are usually in a room used more for “utility” than day-to-day living. Most are inside a metal box or mounted flush with the wall but have a metal cover with a pull tab that swings open.

Circuit breaker boxes mounted on the wall are often gray while those mounted in the wall (flush-mounted) often get painted over.

These can often be found on the wall in your:

In some cases, your home may have two or more circuit panels, known as subpanels. If your subpanel is neatly labeled and has the entire room you will be working in labeled, then you can cut the power at the subpanel.

If you are even slightly unsure, cut the power at the main circuit box.

To turn the power to a room off, find the switch or knob that is labeled for your room and turn it to the OFF position.

Changing a light socket to an outlet or plug 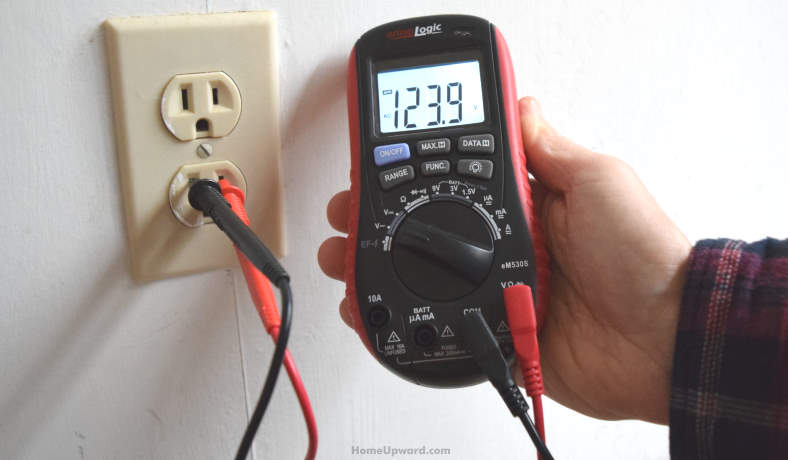 Why convert a light socket to a plug or outlet? 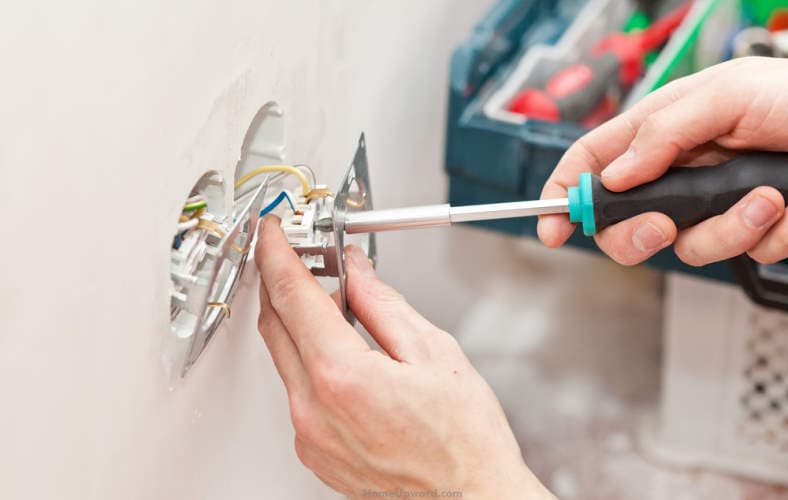 Converting a light bulb socket you no longer use into an outlet or pair of outlets can be a great way to get more outlets without the need to spend a ton of money for a contractor or electrician. Swapping those lights out for outlets means can give you more outlet space to power devices that you actually want to use all over your home instead of further away at the next outlet available.

If you have light fixtures under eaves or up high, but would rather have a power source for holiday lights or decorations, converting that unused light into an outlet means you won’t need long extension cords anymore.

Here’s an even more personal, real-life use:

A surplus store was going out of business, so I stopped by to see what they had on sale. I found a large overhead light that was designed to look like a shop or garage fluorescent light, but actually used LEDs. This light has hooks to hang or mount it, and a plug to power it. And it cost me less than $10!

I removed the separate light that was over my car (it was too small and dim to really illuminate the garage anyway,) and turned it into an outlet. I was able to mount my new energy-saving, ultra-bright light, without having to run new wire to the ceiling!

Hardwiring an outlet vs. using an adapter

As I mentioned at the beginning, you can change a light socket to outlets easily by buying a plug adapter. These work by screwing in the adapter just like how you would screw in a light bulb.

There’s another big problem, however, besides their power handling limit (about 660W): Many of these adapters are not grounded, which means if you use this method, you will also need to use a non-grounded-to-grounded converter or power strip.

Some electronics can’t work correctly without a ground plug and some appliance or power tools require a ground connection to provide the correct safety functions or to allow the device to work (in some cases, if the ground is missing the device won’t work as it assumes there’s a safety problem).

Adapters are also limited in their power output. In some cases, they will have 660W max which will be fine to power small electronics, TVs, and appliances. However, many standard sockets have a 100W max, which will significantly limit what you can plug into the adapter.

It is safer to convert a light bulb socket to a plug – and you can get a LOT more power!

Tools you may need for your light socket to outlet conversion 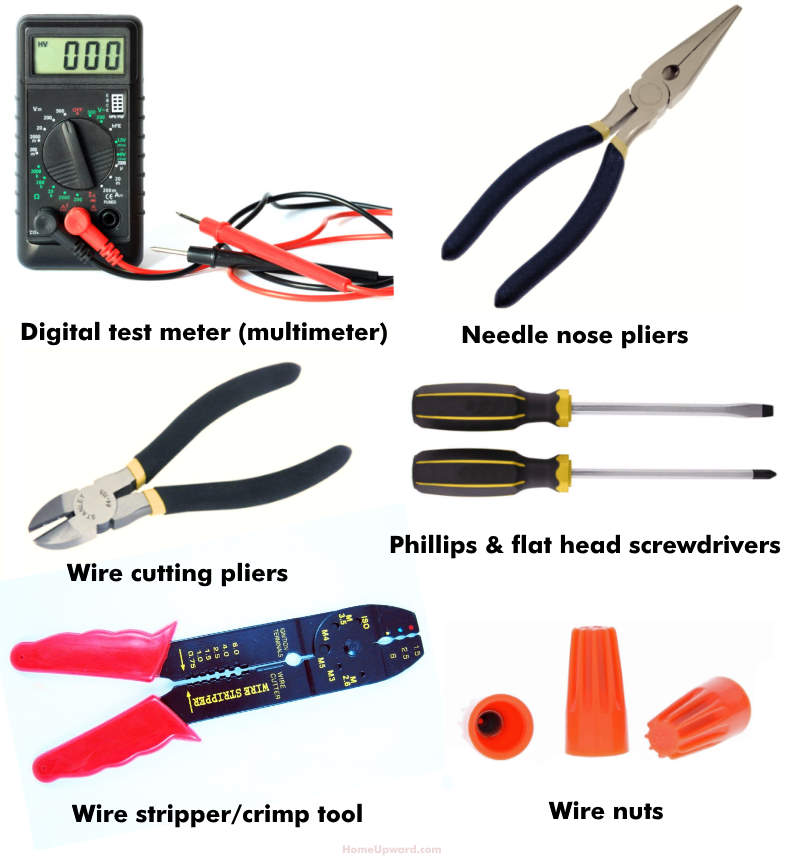 If you’re not sure you can do the job on your own, contact a professional electrician. However, it’s actually not very hard – but you’ll need some tools and supplies (although if you shop smart they’re not expensive).

Tools you may need to complete the conversion: