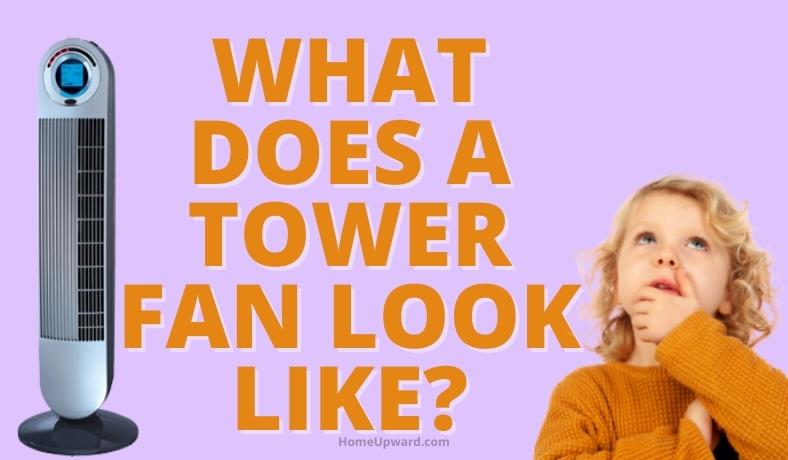 Tower fans have many benefits – but what does a tower fan look like? What sets a tower fan apart from other fan styles?

In this article you’ll learn this and much more! 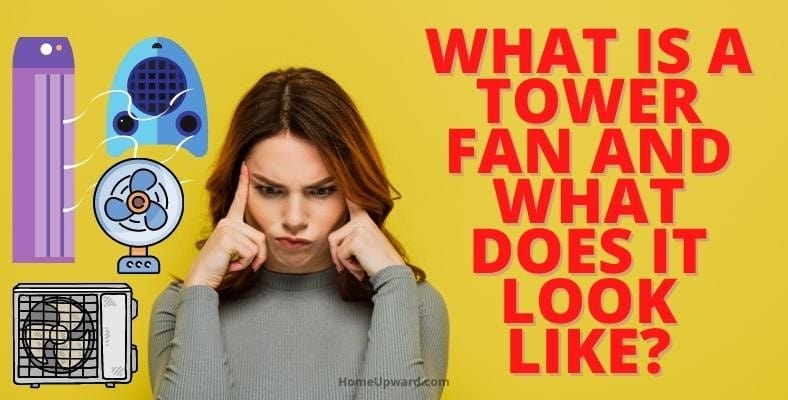 What is a tower fan?

Tower fans are given this name for a reason – they’re shaped like a tower. They have a tall, slender design along with a wider base for stability as part of how they operate to cool you & a room.

Unlike other style of fans they use a cylindrical fan assembly with tall vertical fan blades. The vertically oriented fan blades are covered by a grill built into the chassis to prevent fingers from touching them. Tower fans, unlike other types, are quieter and, in many cases, have more fan speeds you can pick from too.

They’re designed to blow air differently than other electric fans as you’ll see.

How tall are tower fans usually?

On average, tower fans are between 30 – 40 inches tall (or around 100 cm, or just over 3 feet). They’re available in sizes that range from small units that can be placed on a desk to very large heavy-duty workshop sizes.

Smaller desktop (personal) sized units are somewhere around 15 inches in height, perfect for a desk or cubicle at work.

How do tower fans work? 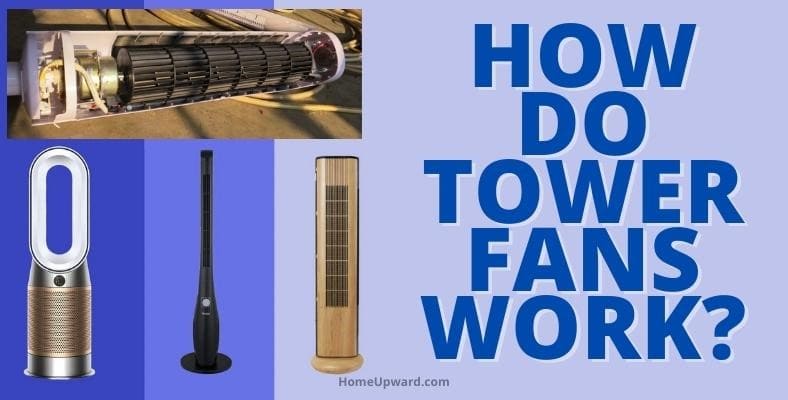 The cylinder-shaped fan assembly placed on a shaft is turned by an electrically driven motor. The blades of this fan assembly are vertically orientated (as mentioned earlier) and have a curved shape. Rather than being driven horizontally like conventional fans, the air is forced in a vertical pattern which results in the airflow blowing in a larger area from top to bottom (as opposed to a circular area as with others).

Tower fans cool the air using a process called forced convection. Fans create a cooling effect when the airflow, which is spread at a 90-degree angle, blows across your skin. The vertical flow of air blows across objects (such as your body) thereby reducing heat and the convection effect (the moving of heat) creates the sensation of cooling.

A combination of the tall air output means the air output feels a little bit like a cool breeze. The same electric motor also drives a gear assembly (for models that include the feature) to slowly move the fan side to side as it works.

Oscillation is a fancy term for a side-to-side rotation you may have seen in other types of fans. This works by slowly moving the fan side-to-side enabling it to cool a larger area in the room. This creates a type of airflow that spreads across the room in an arc-like pattern.

Due to their compact design, however, most users will find that 90 degrees are more than enough. 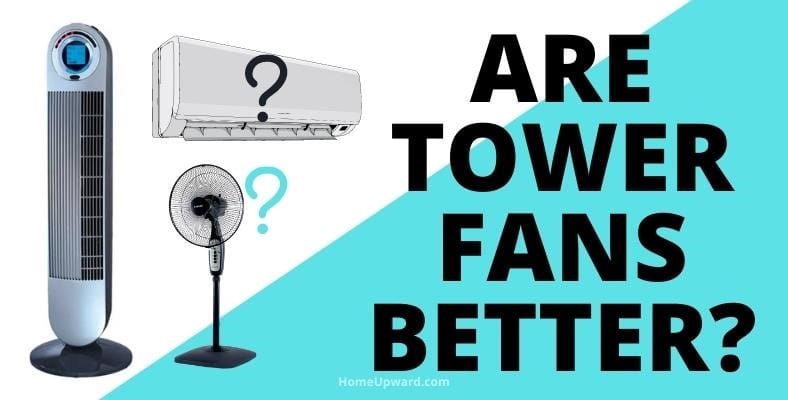 There are two main points to consider when thinking of buying a tower fan. Will this fan be used to replace, or in addition to, air conditioning? And if it’s to replace or reduce the amount of air conditioning used, how do you choose between a tower fan or other types of fans?

Tower fans use a lot less energy than air conditioners – somewhere around 1/10th as much, or even less! For every degree warmer you turn your air conditioner you can actually save hundreds of dollars a year by using a tower fan instead.

While air conditioners use are power-hungry compressor motor to circulate freon refrigerant under pressure and remove heat, tower fans circulate the air already in the room. When you use it with an air conditioner, a tower fan can really reduce the amount of energy you are using from the air conditioner alone.

Tower fans vs. other fans

What makes tower fans unique is their shape and function. Their rectangular and vertical design makes them perfect for small spaces, apartments, or rooms where the air conditioning doesn’t cut it. Tower fans don’t use much electricity, either, making them a great choice for anyone looking to lower their energy consumption.

A traditional pedestal fan provides a lot of power – but they present a safety hazard for small children, pets, or someone who wants to try to touch the moving blades. Additionally, they’re big and heavy, taking up large floor space.

Tower fans, on the other hand, can fit into tight corners or small spaces easily.

Most offer 3 or more settings with some offering six or more fan speeds. The higher the speed, the more the noise, and tower fans’ ability to adjust between the low-medium-high settings gives them a wide use that traditional box or table fans can’t offer.

The ease of moving it around is an essential point to note; they’re not heavy (only a few pounds in weight). This makes them easy to carry around or move from room to room. Their slender cylindrical design makes them easy to store, especially in rooms where storage is important. 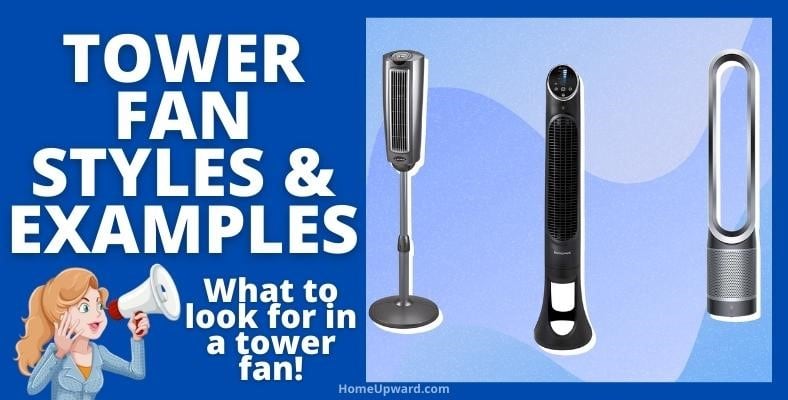 Tower fans come in many styles – not just fixed and oscillating! When it comes to deciding on your next tower fan, there are a lot of options to select from.

There are a few things to keep in mind when buying your next tower fan. First, look at the air output of the fan – will it cover the entire room in which it is to be placed? Then, find the fan that has the best features and style for your tastes.

What to look for in a tower fan

Besides the basic options of height, width, weight, and oscillation, there are other unique features that come standard on many tower fans. Pick a color that matches your current home, bring home a style that goes with your existing decor, or even opt for a model that will clean the air you breathe.

When you want to buy tower fan models, here are a few things to look out for:

Axial fans uses many blades to spread air. In an axial tower fan, the blades are usually arranged in a vertical line in the main body piece that oscillates. Table fans, ceiling fans, and pedestal fans are all types of axial fans. 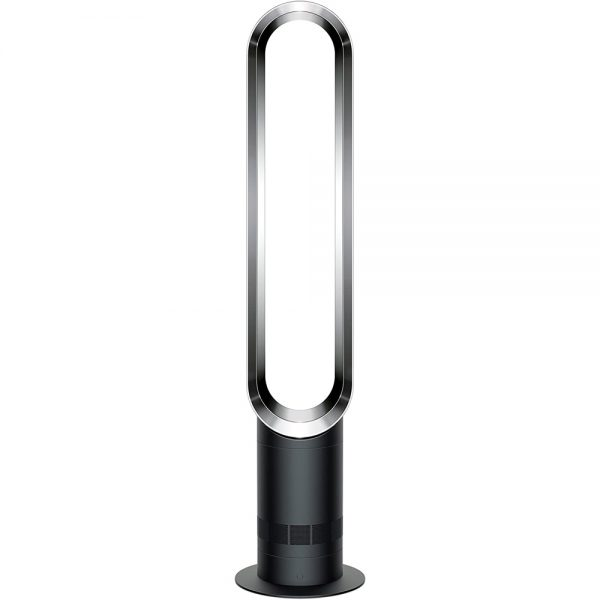 Bladeless Tower fans are uncommon because they do have blades – you just don’t see them. A small intake at the bottom sucks air into the body or base where a small motor uses an internal fan to push the air through irregularly placed internal blades.

The air then moves out through a small slit that usually runs the length of the circle. The manufacturer Dyson produces some very unique products with this type of design. 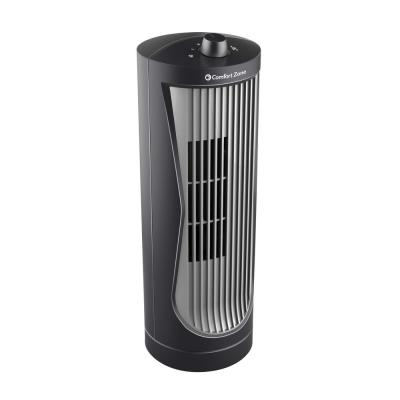 The traditional tower fan style you may have already seen, centrifugal tower fans work by emitting the air with a vertical (top to bottom) effect. Centrifugal fans use a propeller (blade) assembly that’s on it side.

In this type, an internal fan is perpendicular to the airflow and as the air goes through a set of vents and louvers until it reaches you and the room.