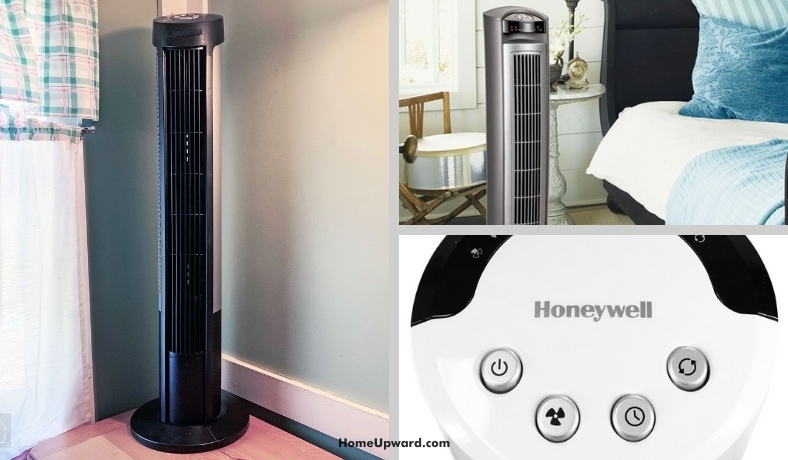 Tower fans are growing in popularity due to their thinner profile and effectiveness at cooling a room. Looking at its small vents, you may ask yourself, how does a tower fan work?

Those good ‘ole box window fans from decades past are still around – but if you want a fan that takes up as little space as possible a tower fan is one of the best choices. Read on to learn more!

How Does a Tower Fan Work? 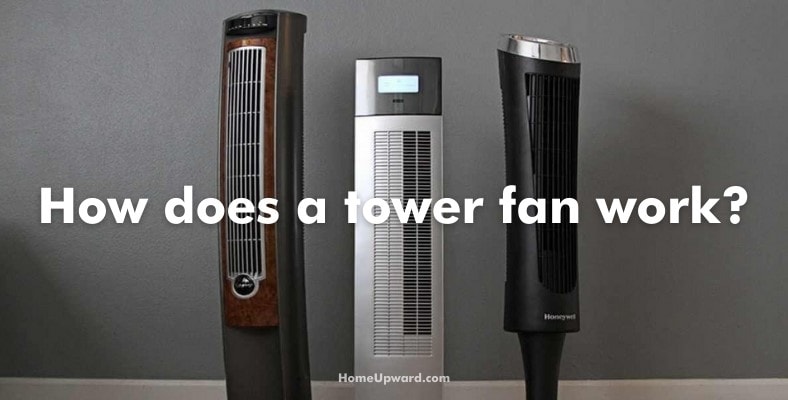 Aesthetically, a tower fan is more contemporary looking than a pedestal floor fan or box fan. They generally come in two colors, either white or black, and in several sizes. Some even have digital displays with remote control for extra convenience. Not only are they less obtrusive, but also they are lighter and more portable than some other types of fans.

Many tower fan brands now come with remote control, so you don’t even have to get up to power it up and change the speed. Some also have timers that allow you to save some money on electricity if you forget to turn off appliances.

How Does a Tower Fan Cool the Room?

Even though tower fans are deceptively slim, they cover a large amount of square footage. It typically has a vent anywhere from three to five feet tall that disperses air where it’s directed. The base of a tower fan is usually a foot or less in diameter, so it doesn’t take up much room if that’s a concern.

Although a tower fan can’t cool air like an air conditioner, it creates wind flow in the room, making it feel cooler. Since hot air rises, the hottest part of the room is near the ceiling, and the coolest part is by the floor. A tower fan that pulls in air from the base will grab the coldest air in the room to circulate.

Both the air inlet and outlet (vents) must be unobstructed so the fan can work at maximum speed. You can use a can of compressed air to clean the vents if there is no way to change a filter. Otherwise, it will just blow dust around the room and won’t circulate the air as well as it could.

When you circulate air, the ambient temperature either remains stable or lowers slightly. We perceive stagnant air as warm and humid after a while. As our skin sweats, it pushes out warm fluids that need to evaporate to cool our bodies down. The sweat can’t evaporate quickly enough if the air is too humid, so we feel overheated. A fan helps our bodies cool down by speeding up sweat evaporation. This is called the wind chill factor. If you want to increase this, simply place a fan at high speed close to your body.

You might notice that if you merely wipe your sweat off, you don’t feel cooler. The mechanism of sweat evaporation causes the heat energy in the sweat droplet to dissipate. The energy loss from the sweat then cools down your skin’s temperature.

Despite making you feel cooler, keeping a tower fan on all night may not be advisable. The blowing air could dry out your sinuses, mouth, and skin overnight, especially if it’s set on high speed.

What Does an Oscillating Tower Fan Do? 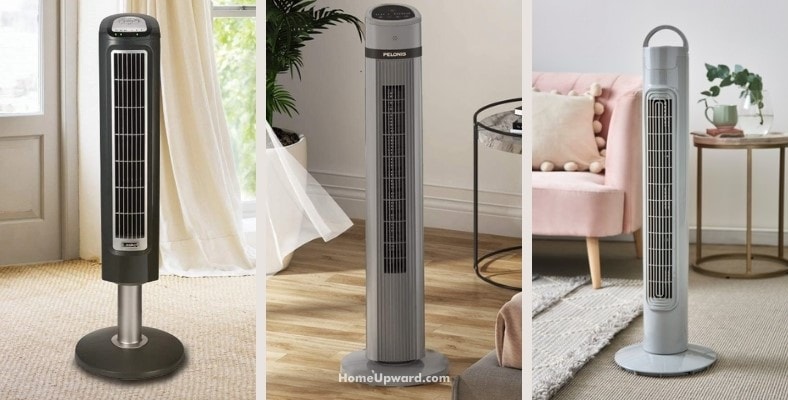 An oscillating fan moves from side to side to help disperse air around a wider area. This is much more effective at cooling a room than a stationary box fan which can only point air in one direction. Most fans with an oscillating feature can move either slowly or quickly, depending on how much airspeed you want.

Using an oscillating tower fan is a good choice to cool a small room, and you don’t have much floor space. You can tuck it in a corner where it’s barely visible yet still creates a lot of wind. Since it oscillates at a 90-degree angle, putting it in a corner space lets you maximize your floor space while getting the most air circulation.

How Much Electricity Does a Tower Fan Use? 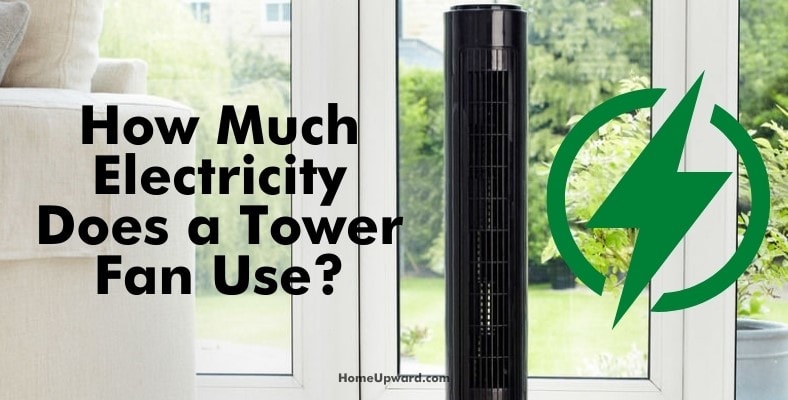 In terms of cost savings, a fan is always cheaper than an air conditioning unit. A typical AC unit uses between 500 and 1,500 watts of electricity an hour. Contrast that with an average tower fan that uses up to 100W of electricity an hour if it’s on high speed. If you want to compare tower fans with other types of fans, the power usage depends on the quality, brand, and motor size.

Which is Better: a Tower Fan or Box Fan? 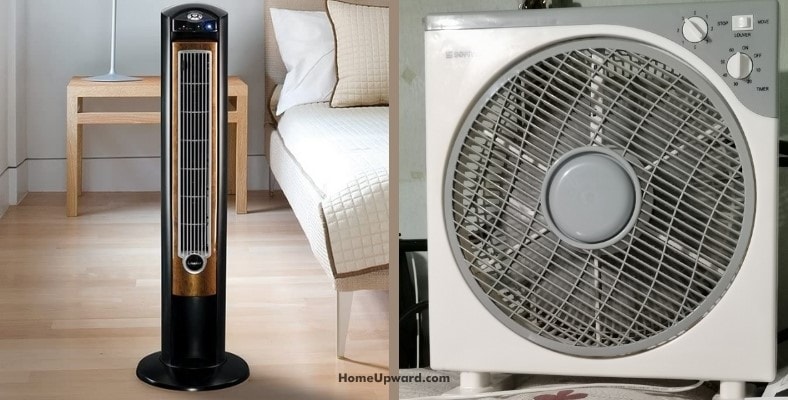 A traditional box fan uses a propeller to push air forward with blades that spin clockwise. Unless it has an oscillating feature, it will only push air in one direction and one specific area.

However, a tower fan has impeller blades that bring in air through the vertical column’s back (or side) and push it out through the front vents with the motor’s power. Essentially, the more powerful the motor, the greater its wind speed.

One advantage of a box fan is that it can bring in fresh air from outdoors if placed in front of a window. They are also usually cheaper than tower fans.

As far as taking up space, a tower fan is clearly the winner.

Reasons to Get a Tower Fan Instead of a Box Fan

Pedestal fans use roughly the same amount of electricity as tower fans, depending on their speed and whether they’re Energy Star Certified.

Tower fans are usually a little more expensive, especially if they have premium features like an ionizer, air filter, or remote control.

You may prefer a tower fan if you have a small room with limited floor space, want an ionizer feature, and enjoy the aesthetic of a streamlined column. This type of fan is also easier to clean and quieter than a pedestal fan.

The safety of a tower fan is something you may need to consider if you have small children. Its blades are located deeper inside, which may be safer for curious fingers, although they can still tip over like a pedestal or box fan.

Tower fans, like bladeless fans, tend to be very quiet. Since they have fewer moving parts, there is less rattling overall. Some tower fans have a sleep mode, where it becomes quieter and has more of a “white noise” effect to help you sleep.

What Does an Ionizer Do on a Tower Fan? 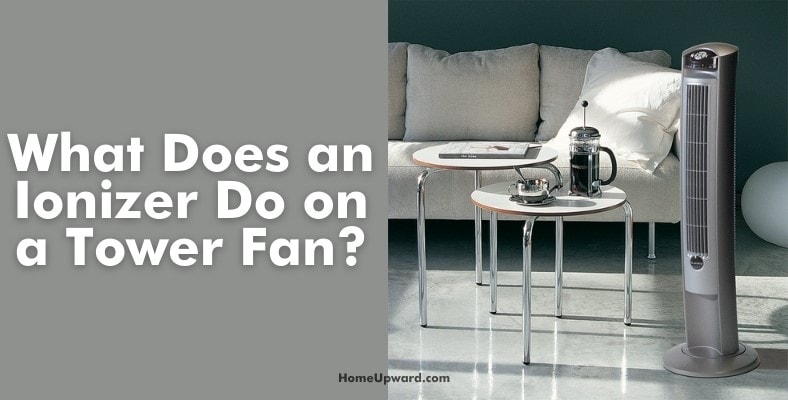 Many brands are now offering tower fans with ionizers and filters. An ionizer is a feature that brings in air and charges it with negative ions before blowing it out through the vents. These charged air molecules capture common pollutants like mold, smoke, dust, and odors. They also reduce static electricity in dry environments. In contrast, a positively charged ion comes from WiFi, road pollution, and even our computers and electrical devices.

Fresh mountain air and coastal areas near saltwater are said to have lots of negative ions. Some people claim that negatively charged ions improve their mood or sleep. A 2013 scientific study showed that negative ions were associated with a “lower depression rating” in participants. 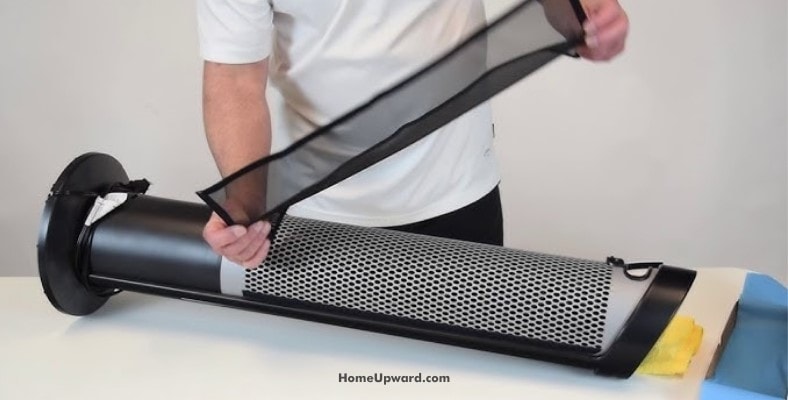 A HEPA filter, or a similar high-quality filter, physically traps small particles in its tightly woven web. The rating of a filter depends on the tightness of the fabric mesh. A basic filter will capture things like lint, dust, and pollen, so people with allergies or furry pets may enjoy this ionizing feature.

As the MERV rating on a filter goes up, it can trap smaller and smaller particles like smog, small viruses, and smoke. A true HEPA traps 99.97% of bacteria, viruses of 0.3 microns, dust, pollen, and other pollutants floating around in your home. A fan with a filter like this could prevent infections from spreading in a household or help against flair-ups for allergy sufferers.

However, if you purchase a fan like this, you must periodically change out or wash the filters per the fan’s guidelines. HEPA filters are best for smaller rooms unless you plan to always keep the fan on. On the other hand, an ionizer works faster at purifying the air.