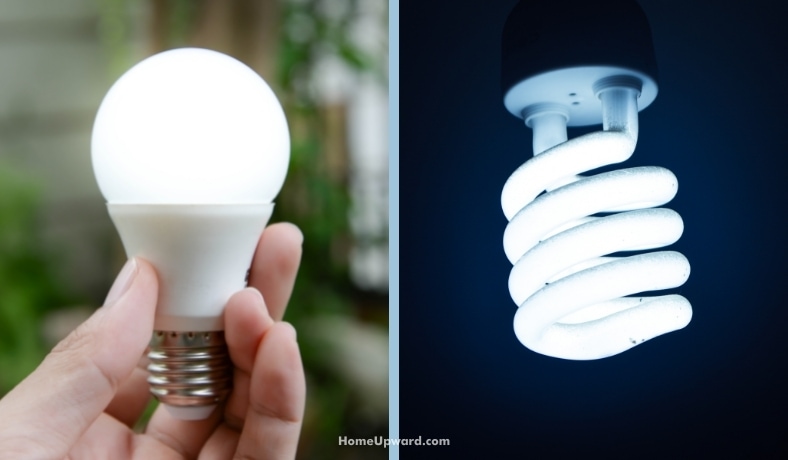 When deciding which light bulbs to use in your home, there are many things to consider. You may find yourself asking questions like, between LED lights and compact fluorescent lights (CFL), which one lasts longer? What is the main difference between the two?

You may also be wondering about the price points of both options or just simply curious about which option is generally considered the better option.

We will answer these questions and more for you here. This way, you can decide which option is best for your needs.

What Is the Difference Between LED and CFL Light Bulbs? 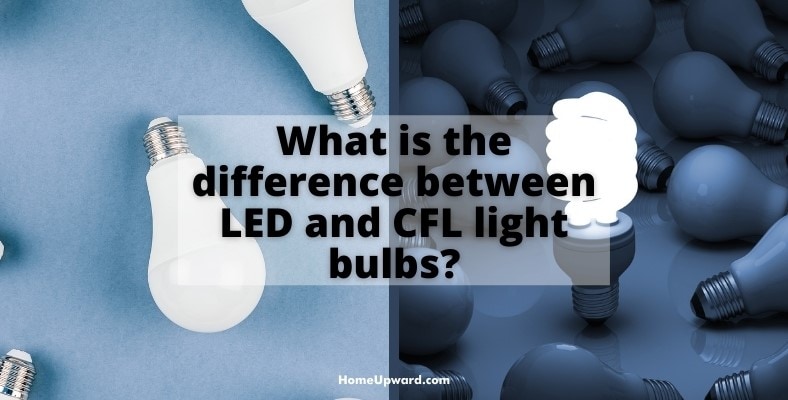 Visible light is emitted by the LED light when the electrons mingle because of the introduction of a power source. The drawback to how these lights work is that dust can get into the bulbs, resulting in a dimmer light than a clean bulb.

CFL lights work by creating visible light when the gases contained in the bulb react with the interior fluorescent coating. Once these filaments heat up with electricity, they burn and produce light.

The drawback here is that once the filament in the bulb burns out, you will need to replace the bulb. The bulb does not last long since the filament is burned to create light. An LED light does not burn a filament because it emits light from a reaction of electrons.

It is essential to learn the differences in how LED and CFL light bulbs work when deciding which one is better.

LED Light Bulbs vs. Compact Fluorescent: Which Is Better? 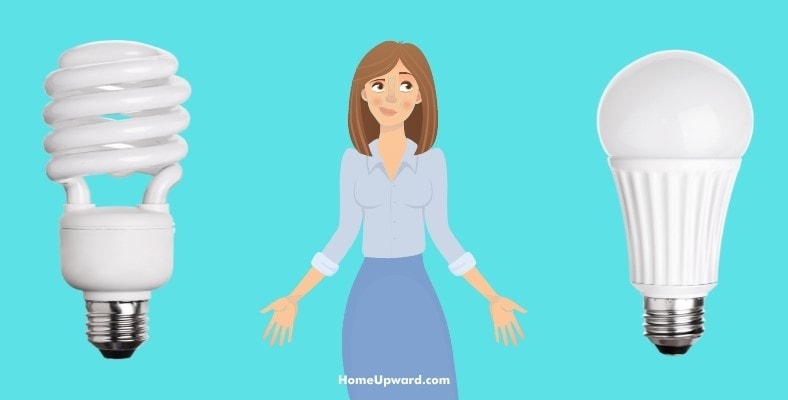 Based on how they work, the research heavily favors LED light as the premium choice of light bulbs.

CFL lights used to be the best option because they last longer and are more energy-efficient than the previously used fluorescent lights, but LED lights are here to stay as the best option.

LED light bulbs are the most energy-efficient and the most durable lighting options today. Additionally, LED lights emit less heat than CFL lights.

There is a drawback to the way that the LED lights work, however. Their light will dim over time, and they will need to be replaced. The trade-off here is that the light emitted is bright and will use less energy.

In addition to this fact, LED lights will save money on your power bill. These lights use 75 percent less energy and last longer than CFL light bulbs.

Their long lifespan brings up another question: do CFL or LED bulbs last longer? 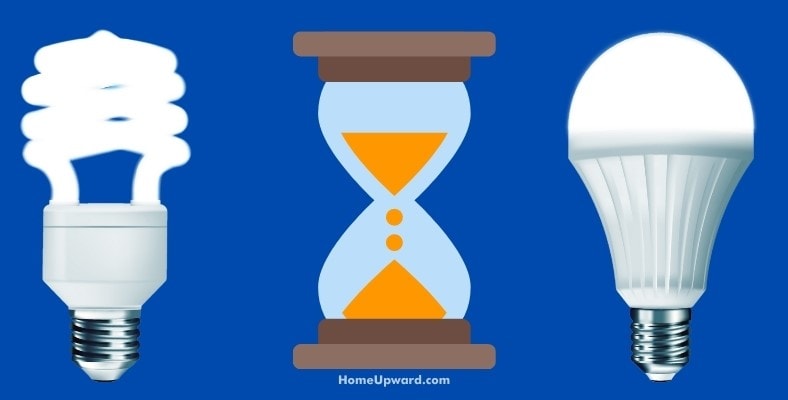 As mentioned in the previous section, LED bulbs last longer than CFL bulbs. Since LED lights run off of an electric current as opposed to running off of a chemical reaction like CFL lights, they tend to last longer.

In general, CFL lights are designed to be in places where the bulb would need to be turned on for more than 15 minutes because it also takes a lot of energy to heat them enough to emit light.

LED lights do not have this issue and are also best suited for dimmer lights.

Are CFL or LED Bulbs Better for Colors? 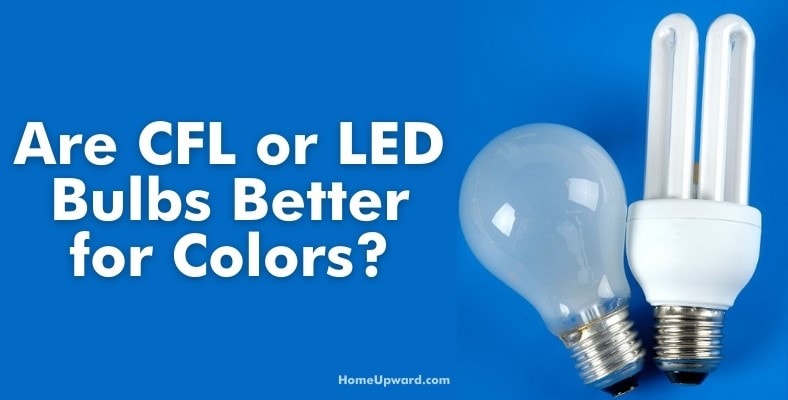 Depending on the look you want to achieve in your home or business place, you may decide on CFL or LED bulbs based on the color of light they emit.

LED lights emit a blue light, which is the same light emitted from computer screens, phone screens, and other electronic devices.

CFL lights emit a more warm-toned, orange-colored light. This coloring is associated with a more inviting feel to a home.

Each light color, the blue light or the orange light, interacts with certain colors in the home differently. Deciding what kind of feel you want in the space would be an excellent place to start when deciding on LED or CFL bulbs.

Regarding the color of the bulb, both CFL and LED lights are good options. Based on the way an LED light works, there are now possibilities for color-changing light bulbs controlled by remote or Bluetooth capabilities. Currently, there aren’t any options available that work in this same way for CFL lights.

There are, however, colored CFL bulbs that provide visible color to your room, but they will not be as strong as their LED counterpart, nor will they be able to be changed by remote control or Bluetooth controls. 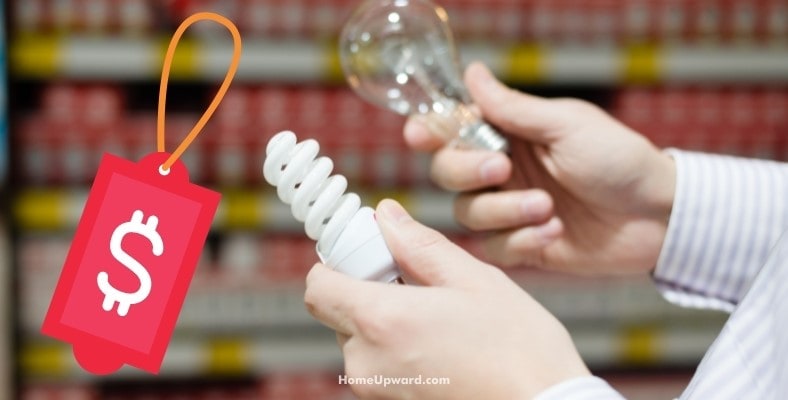 In general, LED bulbs are known to be more expensive than CFL bulbs due to the nature of how they are wired and the cost of materials to create them.

These prices can be a bit higher than the average if you decide to invest in larger bulbs, colored bulbs, or color-changing LED bulbs. The brand name could also cause the price to fluctuate.

However, as pointed out in an earlier section, the LED bulbs last longer and save money on energy costs, so the price may work out to be the same or slightly lower based on your needs.